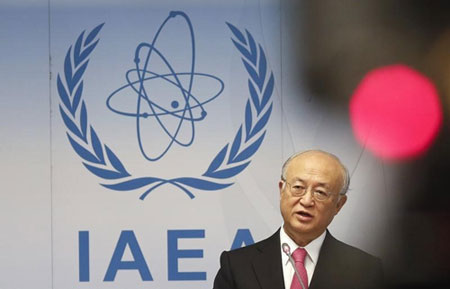 The head of the UN nuclear watchdog cautioned about the Iranian regime’s claims that it is not interested in nuclear arms, saying he cannot guarantee that all the atomic activities of Tehran are civilian in nature.

Yukiya Amano, the head of International Atomic Energy Agency told an IAEA meeting in Vienna that Iran has still not implemented all the nuclear transparency measures it had agreed to carry out by late August.

Amano said that his agency cannot “conclude that all nuclear material in Iran is in peaceful activities.”

Western officials say the Iranian regime must cooperate more with United Nations nuclear sleuths if it wants to settle a protracted dispute with six world powers over its nuclear program and be rid of crippling financial sanctions.

Although the remarks are not new, Yukiya Amano’s comments are significant amid a renewed deadlock in the 12-year probe into the military dimension of the Iranian regime’s nuclear program.

The National Council of Resistance of Iran (NCRI) revealed on October 8 that the Iranian regime has moved a nuclear weaponisation and research and planning center to avoid detection by the United Nations nuclear watchdog.

According to the information from sources inside Iran, the Iranian regime has moved the Organization of Defensive Innovation and Research (SPND) in July to a secure site in a defense ministry complex about 1.5 km (1 mile) from its former location.

To divert attention from key elements of the center the Iranian regime has left “non-sensitive” sections at the old site.