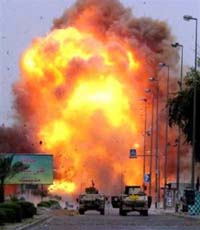 Agence France Presse, WASHINGTON, December 25 – The White House on Monday said it was investigating two Iranians who have been detained by US forces in Iraq, after releasing two other Iranians who had diplomatic immunity.

The White House declined to reveal the nature of charges against the detainees, but cited Iranian "meddling" in Iraqi affairs.

The spokesman said two of the detainees had been handed over to Iraqi authorities.

"Two had diplomatic immunity and were released to the GOI (Government of Iraq) which released them to their government. We continue to work with the GOI on the status of the remaining detainees. That investigation is going well," Conant said.

Iraq’s government, meanwhile, protested the arrests, saying that two of the detainees were invitees of President Jalal Talabani.

"Two people who were invited by the president to Iraq have now been apprehended by the Americans, and the president is unhappy with the arrests," Hiwa Osman, President Jalal Talabani’s media adviser, told AFP.

"The invitation was within the framework of an agreement between Iran and Iraq to improve the security situation," he added.

"A few days ago we became aware that US forces, contrary to international laws, had arrested Iranian diplomats who were invited by the Iraqi government," Iranian foreign ministry spokesman Mohammad Ali Hosseini said.

"This action is not compatible with international law and it will have unpleasant consequences," he said, as quoted by the Mehr news agency.