US Vice President Urges EU to Stand With Iranian People 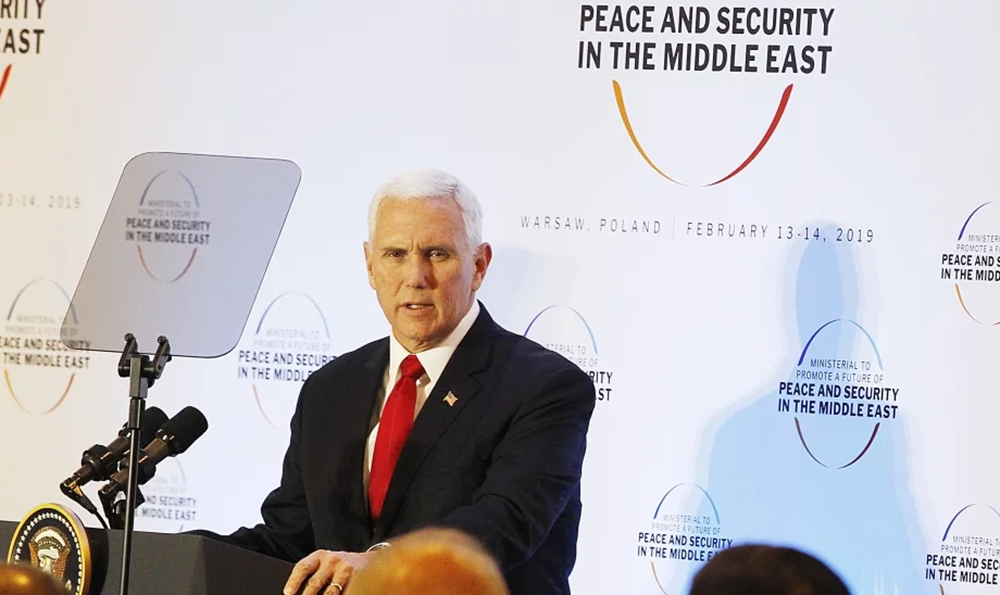 US Vice President Mike Pence said that Iran is the “greatest threat to peace and security in the Middle East” during a speech at the Warsaw Conference on international policy regarding the region on Thursday.

For forty years, Pence pointed out, the mullahs in Tehran have wreaked havoc on the Middle East through their support of terrorist proxies and militias (i.e. Hezbollah and Hamas), missile programmes, and interference in conflicts (i.e. Syria and Yemen), but this has to end.

He added that Iranian troops are propping up the Bashar Assad dictatorship in Syria, while in Yemen, the Iran-backed Houthi rebels displaced the legitimate government and seek to destroy any attempts for peace. In Iraq, Iranian-backed militias are crushing Iranian opposition and stealing international aid aimed at helping the country recover from ISIS.

Pence also spoke about how the Regime advocates for another Holocaust, while denying the first, and seeks to wipe Israel off the map. Noting that Iran-backed Hezbollah in Lebanon has a cache of over 100,000 rockets and missiles, equipped with Iranian-supplied advanced guidance systems.

Pence said: “The Iranian regime is the leading state sponsor of terrorism in the world. They have bombed American embassies, murdered hundreds of American troops, and even to this day, they hold hostage citizens of the United States and other Western nations. Iran has brazenly defied United Nations sanctions, violated resolutions, and plotted terrorist attacks on European soil.”

And how can they afford to do so? By robbing the Iranian people.

The Iranian people, who have spent over 100 years fighting for a democracy that is yet to come, are the biggest victims of the Regime.

That is why the US stands with the Iranian people in their uprising against the mullahs because they deserve to live free as much as anyone.

The U.S. withdrew from the Joint Comprehensive Plan of Action (JCPOA), or nuclear deal, last May citing that the deal failed to keep the world safe. This led to the reimposition of sanctions against the Regime.

Pence said that President Trump had been right to do so because the general agreement at the Warsaw conference is that Iran has only become more aggressive since it was signed.

Despite listing off the many successes of this policy, Pence decried that the US’s key European partners have actively worked against them on this with the creation of a special financing mechanism.

Pence said: “We call it an effort to break American sanctions against Iran’s murderous revolutionary regime. It’s an ill-advised step that will only strengthen Iran, weaken the EU, and create still more distance between Europe and the United States.”

He said that the US will only get tougher on Iran until it sees a change in its behaviour and encouraged Europe to stand with America and, more importantly, the Iranian people.

Pence said: “All of us must stand strong [to confront the Regime]. As Iran’s economy continues to plummet, as the people of Iran take to the streets, freedom-loving nations must stand together to hold the Iranian regime accountable for the evil and violence it’s inflicted on its people, on the region, and the wider world.”