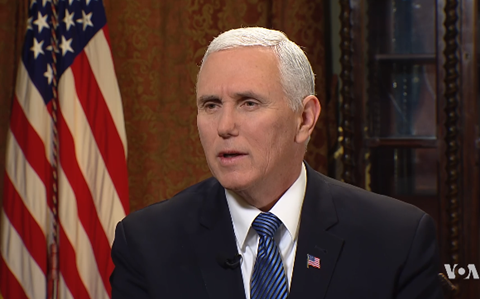 NCRI – Important points and remarks of Mike Pence in this interview are as follows:

•It’s important to remember, first and foremost, that Iran is the leading state sponsor of terrorism in the world. I mean, not only do they oppress their own people, deny human rights to their own, but they also export terrorism across the region and continue to be an enormously dangerous, destabilizing force. And so to see the people of Iran rising up to demand change in their country should hearten every freedom-loving American and people who cherish freedom around the world.

•I think there’s an extraordinary amount that the United States and countries around the world can do for the people of Iran if they will continue to stand up for their own freedom and to stand up for change, and to reject the radical ideology that overtook their country decades ago and continues to beset the wider world through the export of terrorism from Iran.

•the last administration not only was silent when the good and courageous people of Iran were rising up for democracy, but they also pushed forward and embraced the disastrous Iran nuclear deal that President Trump refused to recertify and we’re continuing to provide leadership on.

•The hope of the Iran nuclear deal was that it would encourage a more moderate Iran, but we’ve seen nothing of the kind. But to see people taking to the streets again in Iran, and to now have an American President who’s willing, in that great American tradition, to affirm and to say to the people that we’re with you, we support you, we’re prepared to help you achieve that freer, more prosperous future, I think it represents a genuine opportunity.

•The repression by the regime, by the Ayatollahs in Iran is not surprising. They continue to be a nation that denies basic human rights to their people. And to be shutting down communication means and social media is no real surprise.

•And I think this is a very hopeful moment. And my hope, and really my prayer, is that the people of Iran — a youthful population, a well-educated population — understand that the United States of America and the people of this country are their natural ally. We want to see them achieve a free and democratic future. We want to see them step away from a regime that continues to menace the world and threaten the world and threaten to develop nuclear weapons.

•We believe that the sanctions are working. They’re not just working in Iran; … And this President, this administration, are absolutely committed to continue to bring the full economic weight of the United States and these economic sanctions to bear on Iran.

•Now, we’re also working with the Congress to arrive at a new agreement and a new set of conditions for sanctions going forward. The reality is the Iran nuclear deal was so ill-founded because, in part, it not only did it not deny that Iran could develop a nuclear weapon; by only being a 10-year agreement, it virtually guaranteed that they would develop a nuclear weapon after that 10-year period of time.

Previous articleCutting off Internet and Filtering Social Media to Prevent the Spread of Uprising and Release of Its News
Next articleIran: Failure of the Mullahs’ Counter-Demonstration