‘We will not be deceived by Rouhani’s smiles’: Prominent EU politician 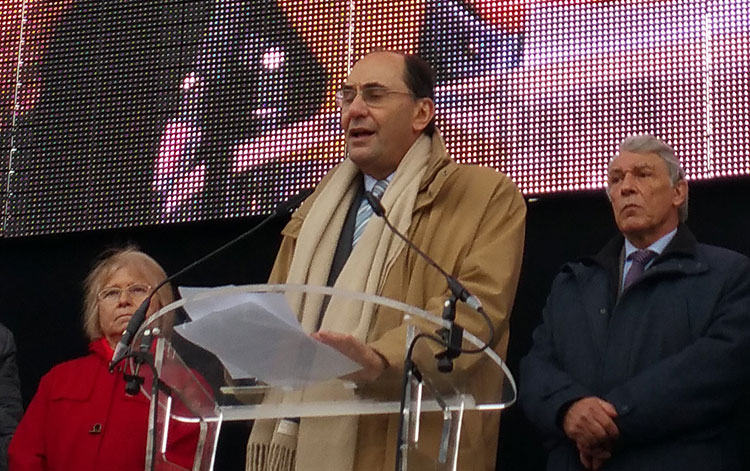 “We will not be deceived by Hassan Rouhani’s smiles. If he was a true moderate, on his very first day of presidency he would have protested against the executions that are happening in Iran; he would have released the political prisoners; he would have stopped acid attacks on women and many other brutal punishments,” Dr. Alejo Vidal-Quadras, President of International Committee In Search of Justice declared in his speech at Thursday’s rally by thousands of Iranians in Paris simaltanous with Hassan Rouhani’s visit to France.

Dr. Alejo Vidal-Quadras, a Former Vice-President of the European Parliament told the crowd of Iranian opposition members and activists and their supporters: “Rouhani is not bothered by executions. He says executing people is either the commandment of God or a law approved by the parliament that belongs to the people and we only execute it and this has nothing to do with us. Can you imagine that? The whole world is abhorred by the number of executions in Iran and the President of that country says this has nothing to do with him. This is the true face of Rouhani. Indeed you are right to call him the President of 2000 executions and he is not welcomed in any European capital.”

“Today, we are here to say with a loud voice that Iran can never turn into a democratic country and a good friend of the international community by Rouhani or anyone else from within this regime. Iran has an organized Resistance movement led by a competent woman. Iran needs the PMOI, the NCRI and Mrs Maryam Rajavi’s 10-point plan to rid its population of a brutal suppression and rid the international community of terrorism and extremism.”

“It is for the West and international community in general to realize that in any issue related to Iran, it has a rational, tolerant and democratic body to deal with and that is the National Council of Resistance of Iran led by Maryam Rajavi. Any delay in admitting this reality will bring more execution and crackdown for the Iranian people and more bloodshed and insecurity to Syria, Iraq, Yemen and the entire region of Middle-East.”

Previous article‘Rouhani is no moderate, He is not welcome in Europe’
Next articleFrance should not sacrifice human rights for economic purposes: Gilbert Mitterrand