West Cool to Iran on Offer of Talks 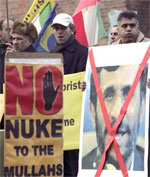 Reuters – Iran called Tuesday for the resumption of talks on its nuclear activities, but Western powers were scornful of the offer, and Russia said Tehran would have to halt atomic fuel research if it wanted negotiations.
"Talk is cheap," State Department spokesman Sean McCormack told reporters.

Britain, France and Germany called off the talks after Tehran removed U.N. seals on uranium enrichment equipment, deepening Western suspicions that it is trying to develop nuclear arms. Iran insists that it seeks only a civilian energy program.

Previous articleIran: A man hanged and a woman sentenced to death
Next articleIran regime determined to continue with its nuclear program