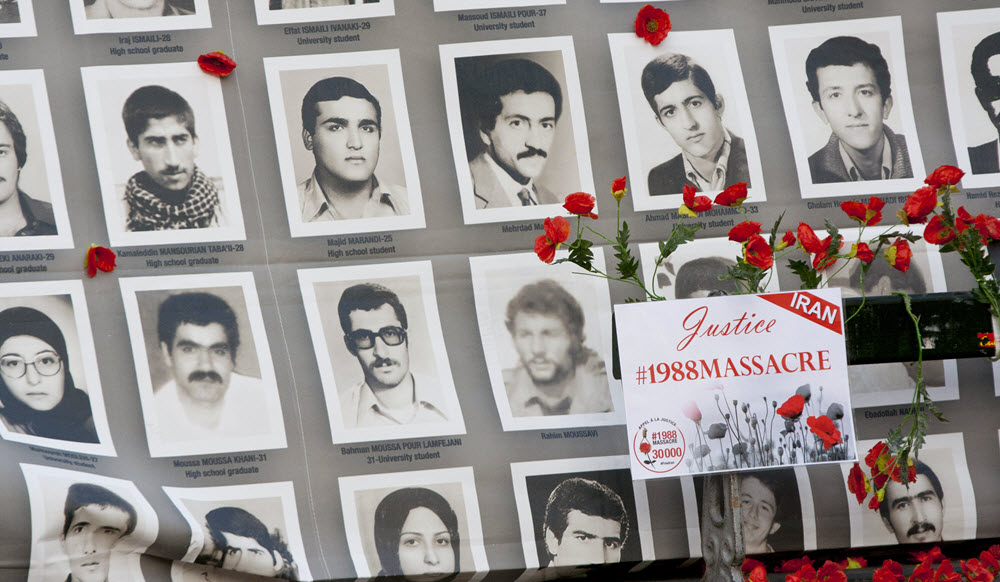 Iranian communities in 20 major cities and capitals throughout Europe and North America will be marking the 30th anniversary of the 1988 massacre of political prisoners in Iran with a simultaneous interactive conference, where they will call on the international community to support the prosecution of the mullahs responsible for the massacre and the ongoing Iranian uprising.

The gathering, to take place on Saturday, will begin at 5 pm CEST and 11 am EST and be broadcast live in Persian, English, French, and Arabic on the Iranian Resistance’s social networks and websites, bringing thousands of members of the Iranian Resistance and their supporters across the world together.

It is part of a campaign to get justice for the 30,000 victims of the massacre, mostly members and supporters of resistance group the People’s Mojahedin Organization of Iran (PMOI/MEK), launched by the leader of the Iranian Resistance, Maryam Rajavi, in 2016.

The campaign demands an independent UN inquiry into the massacre in order to bring those responsible, for a crime widely cited by human rights experts as one of the worst crimes against humanity since World War II, to justice before the International Criminal Court.

In 1988, Supreme Leader Ruhollah Khomeini issued a fatwa for the execution of 30,000 political prisoners, many of whom had already served their prison sentences and were awaiting release.

The Regime formed death committees in major cities across Iran to put the prisoners through show trials regarding their political affiliation. There was no defence allowed and most trials took less than one minute. After which their bodies were buried in mass graves, which Amnesty International has reported that the Regime has and will continue to destroy to cover up evidence.

Even Khomeini’s then-successor Hossein Ali Montazeri was critical of the massacre, as a leaked audio recording proves, and called it the greatest crime in the history of the Islamic Republic. He was then fired and put under house arrest for the rest of his life.

Those responsible for the massacre still hold high-ranking positions in the Iranian Regime today and are responsible for suppressing the uprising that sprung up in December 2017. The mullahs often launched brutal attacks against demonstrators, but this has not stopped the Iranian people who are loudly calling for regime change.

These protesters, much like the victims of the 1988 massacre, are putting their lives on the line to bring freedom and democracy to Iran.

The gathering will take place in the following cities: Paris, London, Berlin, Frankfurt, Stockholm, Amsterdam, Rome, Oslo, Brussels, Bern, Ottawa, Toronto, Vancouver, Bucharest, Helsinki, Gothenburg, Aarhus, Stuttgart. It will feature talks from survivors of the massacre, representatives from Iranian Associations, along with many Western lawmakers and prominent personalities, who will condemn the Iranian Regime for its human rights violations and encourage the international community to adopt a firm policy towards the Iranian Regime.

On multiple recent days, Iranian regime has officially reported more than 200 fatalities from coronavirus over a 24-hour period. In all likelihood, there have...
Read more
Search