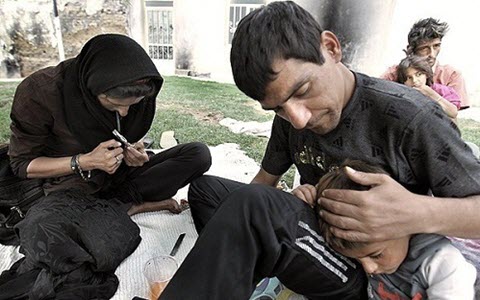 NCRI – With Iranian regime officials refusing to give the real number of the country’s drug addicts, there have always been different figures released by state bodies.

Now after years of waiting for the country’s drug addiction statistics to be announced, regime’s counter-narcotics taskforce spokesman finally announced in a news conference held on 24 June that there are two million 808 thousand drug addicts in the country. This comes at a time when Ali Hashemi, head of the so-called counter-drugs committee in regime’s expediency council, had previously announced that the number of country’s drug addicts was four million.

In reaction to new surveys conducted over the situation of country’s drug addiction and announcement of two million 808 thousand as the number of country’s drug addicts, state-run ILNA news agency on June 26 has quoted Salman Khodadadi, member of regime parliament’s social committee, as saying “according to reports, social harms among women has increased while drug addiction age has decreased. The figures, however, are based on studies done on population aged 15-60. This means that no serious study has been carried out to date to determine drug addiction status at schools, and thus the prevalence of drug use at younger ages has not been accounted for. So, it could be said that the released figures on drug addiction are far from reality.”

The main reason behind the ruinous ‘drug addiction’ disaster is the Mullahs regime’s structure and resorting to repression as one of the regime’s main tools for ruling over people who are forced to turn to narcotics due to social, economic pressures.

Moreover, state bodies like the Revolutionary Guards are the ones who are making the most profit out of a widespread drug use.

Regime officials have repeatedly stated that each of Iranian youth are acting like a time bomb, and drug addiction as a devastating disaster is the most effective way for the regime to get rid of Iranian young generation.