Why Iran Regime’s Revolutionary Guards (IRGC) Should Be Blacklisted? 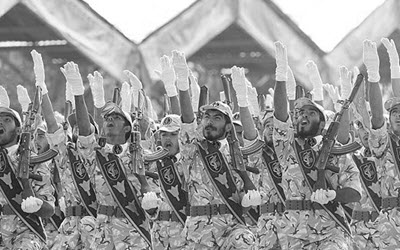 Iran is testing President Trump: Here’s what he should do.

Harassment of U.S. Naval forces by Iranian forces in international waters of the Persian Gulf reveals that Iran’s leadership is prepared to test the new administration: on its publicly stated commitment to confront Iran when it fails to meet its obligations under the JCPOA (the Joint Comprehensive Plan of Action), when it violates United Nations sanctions, or when it engages in destabilizing activities in the region. Raymond Tanter and Ed Stafford wrote in ‘The Hill’ on March 12, 2017 and the article continues as follows:

Given the other actors involved with the JCPOA and U.N. sanctions on ballistic missiles, Washington has only a few unilateral options for confronting Iranian misbehavior. One of those is designation of the Islamic Revolutionary Guard Corps as a Foreign Terrorist Organization (FTO).
The State Department FTO list for 2015, published in June 2016, includes neither the Quds Force nor its parent, the IRGC. Secretary of State Rex Tillerson can add both to the list pursuant to three criteria: They must be foreign organizations engaged in terrorist activity that threatens U.S. persons or U.S. national security (i.e., national defense, foreign relations or the economic interests of the United States). Because of the IRGC-QF’s ongoing support for terrorist activities, no justification for its designation is needed. Herein we argue that its parent organization, the IRGC, also merits designation, due to its function as the paymaster of the Quds Force.

The IRGC-QF is not an element of the armed forces subordinate to military leadership; it is a distinct entity that serves the Supreme Leader to guard the Islamic Revolution. As such, it is not in fact a formal governmental entity but an expression of the Islamic Republic’s revolutionary movement. This independence from the elected government’s authority makes it a de facto nongovernmental actor operating in an extra-legal fashion, particularly when operating abroad. Thus, any use of violence by the IRGC-QF would be extrajudicial.

The theocratic structure of real authority in Iran, in which the Ayatollah Ali Khamenei trumps the authority of the president and Parliament, does not create a parallel official state structure; it only allows an unofficial entity, the IRGC, to function outside the formal system of authority while maintaining a veneer of being an official institution within the administrative structures of the state subordinate to the will of the people.

The IRGC is dedicated to protecting the Islamic Revolution, not the state of Iran. As guardians of the Islamic Revolution, it supports terrorist activities by the Quds Force and its other military divisions. The IRGC finances these terrorist activities through its business activities, making the overall organization simply the paymaster for terrorist activities by its constituent elements. Efforts to shut off the flow of funds by using U.S. Treasury sanctions against different controlled or directed business entities become a never-ending attempt to keep track of firms that shut down and reopen under a new name, adding difficulties to blocking the flow of funds to them.

Designating the IRGC would make it far easier to constrain its foreign activities, as legitimate businesses would be obliged to conduct due diligence on partners in the regions — even the hint of a connection might induce them to avoid working with those tainted firms. Designation would enable Tillerson to lobby with countries involved with Iran to sever commercial ties with the IRGC, rather than having to seek to influence them from dealing with the many entities on the Treasury list. It would also give leverage to legitimate Iranian business interests to keep the IRGC at arm’s length, and has the potential to create more space for independent business to grow.

The extent of the IRGC business interests, and the negative impact it has had and continues to have on the Iranian economy, is well documented in a recent work by the National Council of Resistance of Iran (NCRI: “Iran, The Rise of the Revolutionary Guard’s Financial Empire”). In addition to bankrolling terrorist activities abroad, the financial activities of the IRGC starve investments from legitimate businesses within Iran that could be the engine for more moderate political leadership that was to be strengthened by the JCPOA. Any chance for moderate political leaders to sustain efforts to restrain the destabilizing actions of the Iranian regime are doomed to failure as long as the IRGC has a stranglehold on the Iranian economy.

The interconnected network of wealth and power in the hands of the ayatollahs and the IRGC is indicative of their monopoly over the Iranian economy. Currently, to do business with Iran is to do business with the IRGC. Like any rogue state in which regime elements control the economy for its own benefit, rather than that of the general population, the citizens soon face unemployment, high inflation, near-destruction of the manufacturing sector, wide-scale corruption and stagnant wages — a sure recipe for social discontent.

Returning to the international arena, the IRGC financial activities underpin the Iranian involvement in Syria and Iraq. In the case of Syria, the IRGC uses its immense wealth to pay for Hezbollah and other non-Iranian fighters to prop up the Assad regime, reducing the efficacy of the leverage the U.S. and others can bring to bear and increasing the influence the Iranian regime will continue to exert in Syria after the war there comes to an end. Pro-regime security forces are already establishing themselves in Damascus, and the jockeying for influence in a post-war Syria has begun. Among these groups are those either controlled or financed by the IRGC, establishing a means for Iran to continue to direct events in Syria after the fighting has come to an end — all financed by the IRGC (also documented in a 2016 report by the NCRI: “How Iran Fuels Syria’s War.”

Designation also achieves diplomatic goals. It sends a message to the Gulf States that President Trump is serious about blunting the hegemonic intentions of Iran; it reaffirms his commitment to fighting terrorism by going after the financial empire used to sustain terrorist activities; and it sends a message to the Iranian people that he is resolved to contain the ayatollahs’ revolutionary movement, with no animus against the Iranian people.

Raymond Tanter served as a senior member on the National Security Council staff in the Reagan-Bush administration and is now professor emeritus at the University of Michigan. Edward Stafford is a retired Foreign Service officer who focused on political-military affairs; his last assignment was teaching at the Inter-American Defense College.

Previous articleBehind the Iran Regime’s Hypocrite Style of Negotiations
Next articleThose in the West, Who Naively Turn a Blind Eye to Iran Regime’s Belligerence