Why is Nouri al-Maliki Perpelexed? 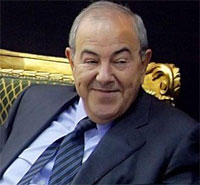 Official website of Dr. Allawi, the Head of Al-Iraqia (the winner of Iraq’s elections) August 6th 2011
The Prime Minister of Iraq has clearly lost his balance. In an interview session prepared by Al-Iraqia state television, when Al-Sumeria Television reporter asked Nouri Al-Maliki about the Spanish Court’s verdict against him regarding the crime he had committed against the resident s of Ashraf, he replied with overt anger, “This verdict is not against Mr. Nouri Al-Maliki but against some military commanders.” This was a big lie that this dictator under the sovereignty of Iranian embassy in Baghdad told. But he knows that this bloody attack on the residents of Ashraf is a stain on the hierarchy of Iraqi government, a government that is neither sovereign nor elected.

What makes it really strange is that since 1986 we have never seen or heard that a single Iraqi has been killed or injured or whose right violated by the members of Mojahedin-e-Khalq Organization and we do not know how he has conjured up 120 complaints against the residents of Ashraf.

On the other hand, we would like to ask why Maliki has turned himself into a carrier of the orders of  a foreign country, meaning Iran, and kills MEK members and physically eliminates them despite the fact that they have been the guests of Iraqis for a quarter of a century. What is the base of their claim of this so-called “Government of Law” when it says they have clearly and unethically intervened in the affairs of sovereign government?

In regards to the verdict of the Spanish Court that has summoned Nouri Al-Maliki and some of his murderer officers, this verdict is issued in accordance with international laws and because Iraq is a member of the United Nations, it is committed to following the orders of this organization. This verdict is not considered intervention in the sovereignty of Iraq, nor in our internal affairs. Maliki does not understand politics, nor does he understand rights and laws, nor is he honest. No wonder he got irritated, lost his balance and resorted to lying in order to get away when he was cornered by Al-Sumeria reporter at Iraqi state television program.