Women Force for Change: Iran Uprising and the Role of Women

NCRI – The Women’s Council of the National Council of Resistance of Iran joined together with female political figures from around the world to empower the women of Iran in a conference held in Paris on 17th February 2018 ahead of International Women’s Day.

The overall theme of the conference was to fight towards abolishment of the suppression of women, including the compulsory veil, and for the immediate release of all political prisoners. The speakers called for the guarantee of freedom of speech and assembly in Iran.

Many of the speakers highlighted that women in Iran were among those that started the protests in Iran at the end of December last month. Mrs. Maryam Rajavi, the President-elect of the National Council of Resistance of Iran (NCRI), paid tribute to these women. She saluted all of the people around the world that are standing behind the people of Iran and said that the women of Syria who have shown extreme bravery must not be forgotten.

Mrs. Rajavi pointed out that during the recent protests women were chanting “Be scared, we are together” and she urged the mullahs to pay heed to this. The women of Iran stand together with their sisters across the world. Internal and international unity will be the downfall of the regime and all sectors of society are involved. This declaration of unity was reinforced by a huge eruption of applause and cheers from the audience. 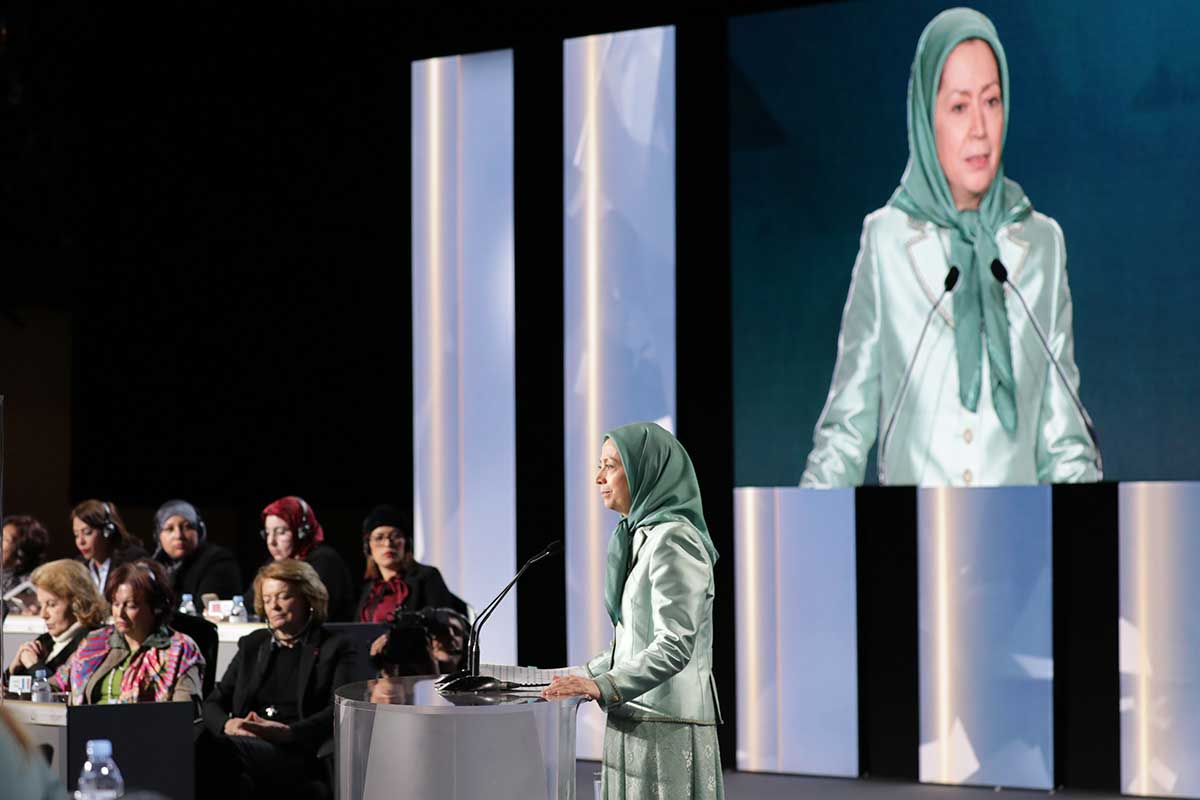 The Supreme Leader Ali Khamenei once said that women’s equality is a Western notion but Mrs. Rajavi said that this kind of belief has no place in Iranian society and this is manifested by the women who started the protests in the fight for their own freedom. She said that it is for this reason alone that the people have the right to overthrow the regime. The devastating oppression must not continue.

Speaking about the claims by mullahs that women should be deprived of the freedom to choose their own clothing through the compulsory veil, Mrs. Rajavi said that this is based on nothing because the Koran states that there is “no compulsion in religion”, therefore imposing anything on women is contradictory to Islam.

The leader of the Resistance ended her speech by urging each and every person in attendance to ensure the uprising continues. She said that any efforts made for the people and women of Iran and anything that is done to compel the different governments around the world is a huge step in the fight for freedom and for the good of humanity.

Rashida Manjoo, the United Nations’ Special Rapporteur on Violence Against Women until July 2015, said that despite the brutality the women of Iran face, they are still fighting for equality and social and human rights. She pointed out that the incarceration of women in Iran is for arbitrary reasons and that the rape of political prisoners, forced marriage, beatings and torture are prevalent in the country. She expressed her disgust that prisoners have been burned by cigarettes and are refused sleep and toilet facilities. She also said that is was an outright violation of human rights to use mental abuse to extract false confessions and the regime has no justification for its actions. 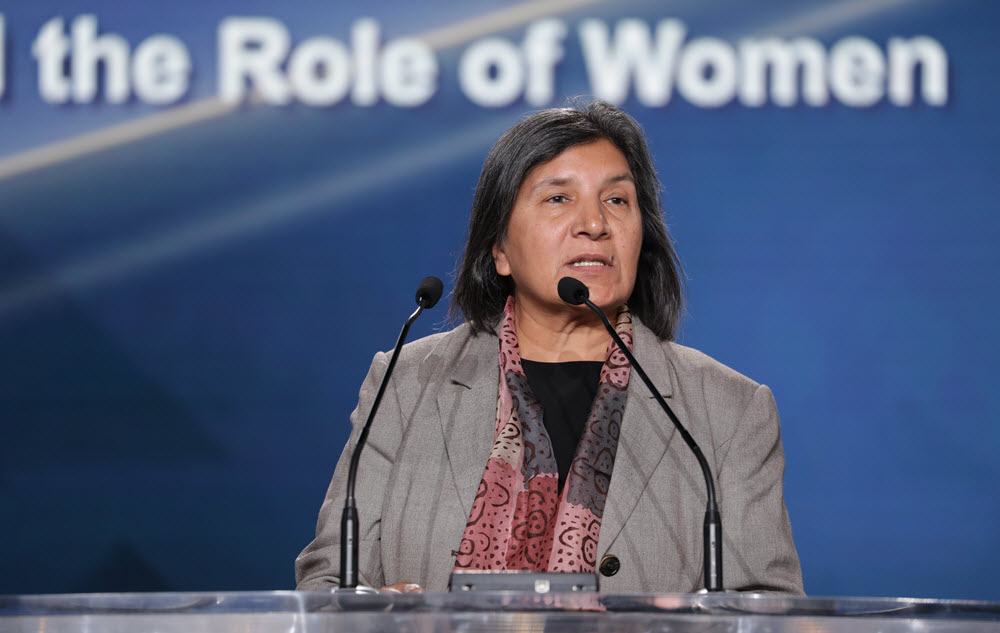 Ranjana Kumari a renowned academician and social activist who has won numerous awards for her efforts in empowering women and girls said that when women rise, nations rise. Kumari pointed out the role of social media, saying that there are 47 million people in Iran that use social media sites. She said that it is a crucial power that the international community can use to help the women of Iran defeat the Iranian regime.

Baroness Verma, a British politician, member of the House of Lords and the Parliamentary Under Secretary of State for International Development and Ministerial Champion for tackling Violence Against Women & Girls Overseas, said that she will make great efforts to ensure that her government takes action with regards to the human rights abuses in Iran.

Baroness Verma emphasised that there is no place on earth where violations should be accepted and she called on Parliamentarians across the world to ask their governments what they are going to do to challenge what is happening in Iran. She said that the human rights abuses in Iran are just as serious as human rights violations that take place in any other country. Human rights are a right for every single person on this earth and no one deserves anything more or less that anyone else. She also called on politicians to ask their governments why protesters are being arrested and why people in Iran are going missing. She said that when you are electing someone to represent you, it is essential that they disclose how they are going to deal with human rights abuses.

Finally, she said: “Let us not have one Madam Rajavi, let us have millions.”

Linda Chavez, the highest-ranking woman in President Ronald Reagan’s White House, urged international governments to stop leaving the regime to continue its crimes. She said that the repression in Iran is unacceptable, stating that if one half of the population is repressed, the whole of society is repressed.

Susana Medina, President of the International Association of Women Judges and a judge in the Supreme Court of Argentina, said that “we should build bridges of knowledge and solidarity all over the world against the injustice in Iran”. Medina said that the violations of women’s rights in Iran must stop and emphasised that the world should be protecting them.

Maria Candida Almeida, Deputy Attorney General in Portugal, spoke about the bravery of the women of Iran who risked everything to take to the streets to protest for their rights. She thanked Mrs. Rajavi for her leadership, tenacity and determination and affirmed that “nothing will stop Iranian women”. “To the women of Iran, we are with you in your just demand to restore freedom and democracy. We will be your voice in the international organization. One day, the people of Iran will be free and there will be justice for all people who were mistreated and abused.”

Former presidential candidate in Columbia, Ingrid Betancourt, said that the women of Iran risk everything to challenge the Iranian regime. She said that those in prison have no defence and are not allowed to see their families – all because they dared to think differently.
Anissa Boumédiène, former First Lady of Algeria, spoke extensively of the crimes of the Iranian regime, highlighting that it acts in violation of international law. She drew comparisons between the women of Iran and the women of Algeria who fought against a similar regime and said that the martyrs there are still being mourned.

Boumédiène highlighted that the young people in Iran were born under the current dictatorship and know no other leadership, yet they are rejecting it and protesting against it. This, she said, is a “failure” for the regime.
At various intervals during the conference, stage acts entered and expressed their solidarity with the women of Iran and the Resistance. 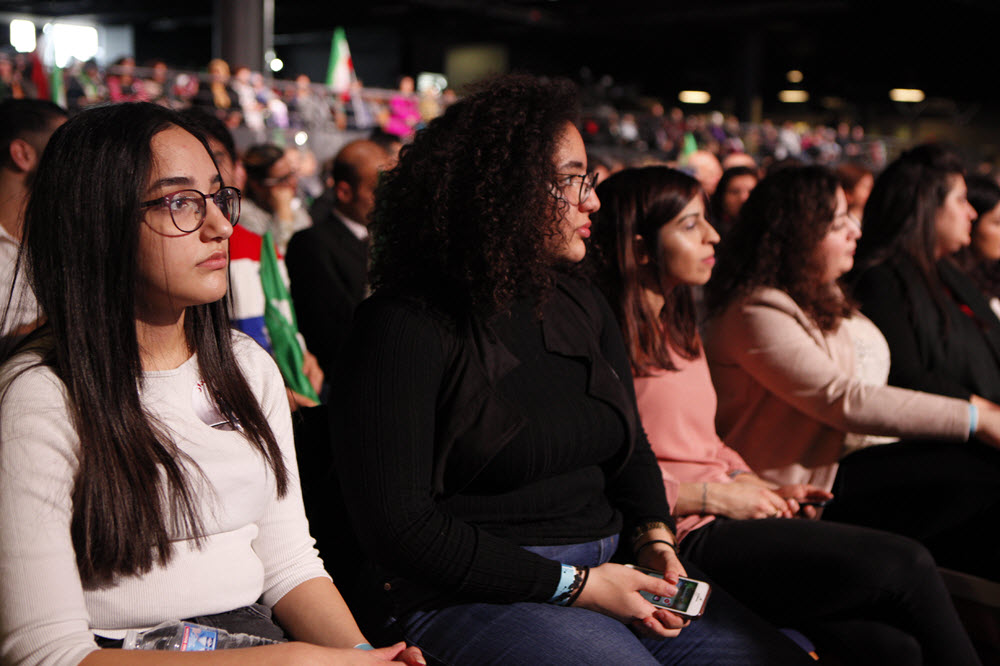