Women make up a third of Iran’s homeless population 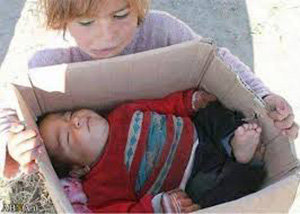 NCRI – Women make up one third of homeless people living on the streets in Iran, according to a senior official of the Iranian regime.

“Our research indicates that there are 15,000 people sleeping in cardboard boxes in the country, of who 5,000 are women,” Shahindokht Mollavardi said on Saturday.

Mollavardi, a vice president in the cabinet of Hassan Rouhani, made the remarks in an interview with the state-run news agency ILNA.

The true number of Iranians living on the streets is substantially higher than official records.

Last year, a deputy director of Tehran municipality’s Welfare Organization estimated the number of people living on the streets of Tehran to be over 15,000 of which 2,000 were women.

The organization also announced that the average age of these homeless women is 32.

Fatemeh Daneshvar, the head of the Social Committee in Tehran’s city council, said in June that the number of pregnant women and children living on the streets in the city is increasing.

Tehran’s mayor Mohammad Bagher Qalibaf has put the number of people sleeping in cardboards in Tehran alone at over 15,000.

Numerous child rights organizations suspect that the number is substantially higher, citing figures of 200,000 or more. Of this number, about 55 percent are the children of Afghan refugees.

Impoverished Iranian women and children live in such difficult circumstances while just one of the foundations that belong to the regime’s supreme leader has plundered $95 billion of the Iranian people’s wealth.