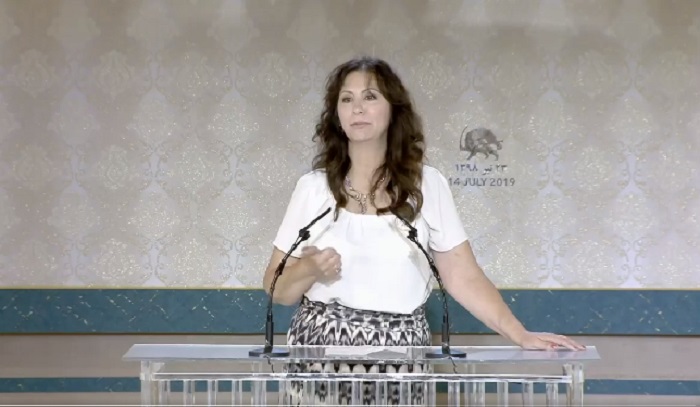 The Iranian regime has denied basic human rights to the people of Iran, especially to women, argues human rights activist Maria Ryan in The Hill.

“For 40 years, Iran’s pro-democracy movement has remained active, despite frequent and often severe reprisals by the regime. The international community has witnessed hints of this movement’s potential at various historical moments, such as the 2009 protests and the nationwide uprising that spread across every major city of Iran in early 2018,” Dr. Ryan wrote on September 12, 2019.

That Iranian women have played a unique role in these uprisings is not a coincidence, she points out. “The sharp edge of the mullahs’ repression has targeted many of them with repressive, misogynistic laws and execution.”

Just last week a female soccer fan died after police arrested her sneaking into Tehran’s main sports stadium dressed as a man; women are not allowed to enter stadiums during male sporting events. According to reports, the 29-year-old woman overheard officials discussing her coming prison sentence at the courthouse — and she set herself on fire and died from her injuries.

“I had the opportunity in July to travel to Albania — along with 350 political dignitaries from 47 countries spanning a wide range of political affiliations — as a sponsored speaker for the annual conference of the National Council of Resistance of Iran (NCRI). We visited Ashraf 3, the new home to thousands of members of the main Iranian opposition movement, the Mujahedin-e Khalq (MEK).”

“The conference I spoke at was called ‘Women in the Iranian Resistance: Defying the Misogynist Regime, Paying the Price of Freedom.'”

“I met many brave women who survived the mullahs’ brutal crackdown. Many said they had suffered in torture chambers for long years. They shared their stories with me, their personal suffering and the loss of loved ones. They explained that, while living in Iran, they were not able to choose their own clothes or their professions; a girl as young as nine years old could be married, they said, and a man could have multiple wives.”

Dr. Ryan said the women she spoke to were forced to leave Iran and were promised safety in camps inside Iraq, only to be targeted by bombs and gunfire. Several of them told her they lost many of their friends to these attacks.

“I videotaped an interview with four of the women. One of the women said she was jailed at the age of six because her parents were imprisoned for supporting the resistance.”

“Yet another woman of Iranian descent relayed a story of losing her best friend to a brutal attack in a camp in Iraq. She, too, has joined the resistance to the regime. She grew up in Tampa, Fla., so she knows what democracy and freedom are — and she wants those same principles for the people of Iran,” Dr. Ryan wrote.

“The conditions of daily life for many Iranians have become so difficult and demoralizing that growing numbers of the people there are ripe for addiction issues, according to the United Nations and other sources. In fact, the Revolutionary Guard reportedly is facilitating the heroin trade — in spite of Iran’s publicly professed hard-core policies against drug trafficking and use. Other critics of the regime have reported unconfirmed stories of desperate Iranians selling kidneys, eyes or even unborn children in order to survive.”

“Despite all of this, the women I met inspired me with their sense of determination, loyalty, patriotism, and faith in their ideals. Their dedication to each other was astounding, as was their camaraderie.”

Women are crucial to resisting Iran’s regime | TheHill. A FIRST TIME LOOK AT THE BACKBONE OF THE IRANIAN OPPOSITION. IT GIVES YOU HOPE OF REAL CHANGE. https://t.co/e3pW2PaQBS

“The NCRI and its many members want basic freedoms that Americans enjoy every single day. They are preparing to become an interim government if the people of Iran should overthrow the current regime. The NRCI has more than 20 councils preparing to stand up a new government in Iran and has pledged that, within six months of taking control, it will hold free elections because it wants a popularly-elected government to rule Iran.”

“Whether or not you believe that regime change in Iran is truly just around the corner, I am absolutely convinced that with such women in the ranks of the resistance, change will come to Iran,” Dr. Ryan summarized.

Dr. Maria Ryan is the chief executive officer of Cottage Hospital in Woodsville, N.H., and is an advocate for women’s rights and human rights.