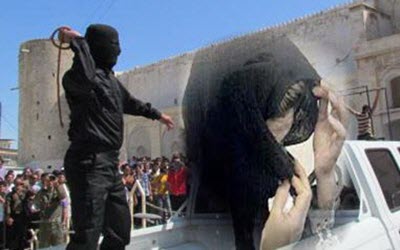 NCRI - Iran's fundamentalist regime has flogged a woman in public in Golpayegan, central Iran, it emerged on Wednesday.

The woman, who was only identified by her initials S. T., was given 100 lashes, state media reported.

The flogging was carried out as punishment over an affair she allegedly had with another man, according to Najafali Alyan, the regime’s prosecutor in Golpayegan. His remarks were carried by the state-run Serat News Agency on April 27.

There haven’t been reports in state media of women being flogged in public in Iran in recent years.

The woman is currently serving a 15-year prison sentence for her alleged role in the murder of her husband in July 2012. The Iranian regime's judiciary is notorious for handing down draconian verdicts without due process, and it has been repeatedly condemned by international human rights organizations.

Farideh Karimi, a human rights activist and member of the National Council of Resistance of Iran (NCRI), strongly condemned the public flogging in Golpayegan.

“The public flogging of a woman in Iran is a new misogynist measure by the Rouhani government, which is extremely disturbing and abhorrent. The women politicians from the West who visit Iran should reconsider such outreaches and their impact in emboldening the regime in its attitude,” she said.

She added: “In view of the new wave of suppression of women in Iran, we urge women’s rights activists and organizations to stand up and speak out against the mullahs’ misogynist policies.”

Last week the mullahs' regime launched a new plan to suppress women for "improper veiling." It deployed some 7,000 so-called undercover 'morality police officers' in Tehran tasked with suppressing women on the streets and alerting official law enforcement agencies of instances of “mal-veiling” and other “violations” of the mullahs’ fundamentalist laws.

The Iranian regime has hanged at least 66 women and 2,300 men since Hassan Rouhani took office as President in 2013.