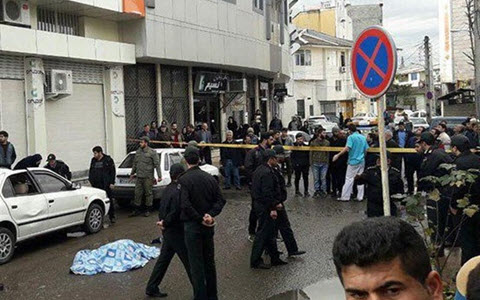 NCRI – Remarks by the governor of Rezvanshahr (Northern Iran) about the suicide of a woman and her two children in the city provoked an outrage among the workers of the Chuka Paper Manufacturing Company of Talesh County.

The governor in an interview with state-run Tasnim news agency affiliated to terrorist Quds force claimed that the suicided woman was insane and crazy. This is while the woman who committed suicide along with her two children was the wife of a worker at Talesh’s Chuka Paper Manufacturing Company who had not received his salaries for many months and were living in absolute poverty.

These statements sparked anger and hatred of workers towards the governor.

A local newspaper quoting Chuka workers wrote: “The governor and corrupt managers of Chuka factory of Talesh have been putting so much pressure on the workers and have not paid their wages for months such that they are not able to buy even a piece of bread for their family. They (the governor and corrupt managers) themselves are insane and crazy because if they weren’t, they would not bring so much disaster to the workers by putting so much pressure on them.”

“These agents, on their own, receive millions of Tomans freeload money each month as salary without exerting any work or effort,” the newspaper added.

The angry Chuka workers said: “Tell the lying governor of Rezvanshahr and the corrupt Friday prayer leader that if you did not receive any salaries for a year, would you have the same conditions?! If you had gone home every day after work while you do not have any money to buy food for your wife and children, would you have felt the same?!”

“You are a bunch of corrupt and impassible peculiars who do not value or care about people and people worth nothing to you, and you only think about the looting and plundering and violating people’s rights and God willing you will be held accountable for your actions soon, and we will take revenge for the blood of this mother and her children,” they added.

“It does not take long that our workers’ anger will overflow and will be rebellious and then nothing can hold us back!”

“The campaign for rescue of Talesh condolences her colleagues and greater workers’ family for the painful loss of a mother and her children who have been subjected to psychological stress from a bad economic situation and poverty.”