Workers must put ‘morality and obedience to leader’ above wages and food, high ranking cleric says 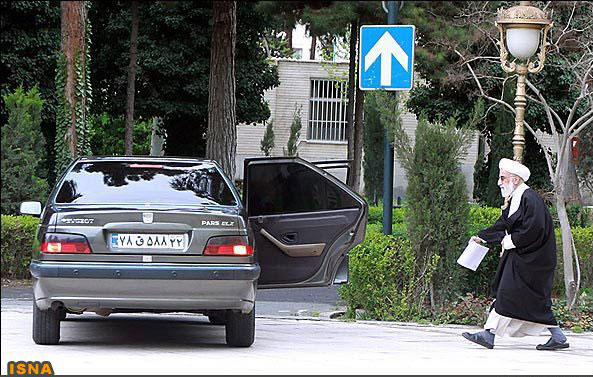 NCRI – Iranian workers should put ‘morality and kissing the hands of the leader’ before their wages – which have plunged to almost a third of the poverty line income, a senior cleric has declared.

Ahmad Jannati, chairman of the Guardian Council, said during Tehran’s Friday prayers: “The workers in Iran should not think only of having an income and feeding themselves. They should think of moralities. The workers should kiss the hands of the Supreme Leader.”

The regime has set the minimum wage for workers at 608,000 tomans, while the officially declared poverty line is 1,800,000 tomans – and non-governmental experts put the figure at 3,000,000 tomans. This means millions of workers can only provide for as little as a quarter of their families’ basic needs.

Jannati’s remarks come a day after International Workers Day, when many workers were arrested as they defied state security forces to stage protests across Iran.

Last year also in May Jannati’s remarks made the headline when he said: “A president must live a simple life, and this simple life must start with him, meaning his house, his personal belongings, and the car he rides must be simple. A person who speaks of living a simple life but rides in a Benz doesn’t understand the people’s pain when they’re hungry and doesn’t sympathize with the lower classes.”

His photos was published as he was getting into his car. The media asked is his Peugeot more expensive than a Mercedes Benz.

Hassan Rouhani’s Ministry of Interior had also refused to approve a permit for a march on International Workers’ Day requested by the state organization ‘Khaneh Kargar’ (Workers’ House), instead officials asked laborers to attend a speech given by President Rouhani.

Workers that went to the speech were banned from carrying protest banners into the auditorium or make any act of protest during the speech.