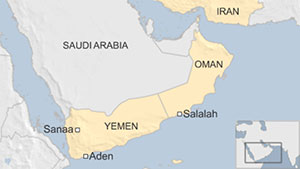 State news agency Saba, citing an unidentified person at the Yemeni presidency, said the government of President Abd-Rabbu Mansour Hadi “has taken the decision to expel the Iranian ambassador to Yemen, withdraw the Yemeni envoy to Tehran and close down its diplomatic mission in Iran.”

The source told Saba that the move was a protest against the Iranian regime’s “continued interference in the internal affairs of Yemen and violation of its national sovereignty,” citing a recent detention of an Iranian ship loaded with weapons.

Saudi-led coalition forces, which have been battling the Houthis for the past six months to try to restore Hadi to power, said on Wednesday they had seized an Iranian fishing boat loaded with weapons intended for the Houthis.

Iran’s regime is an ally of the Houthi fighters who seized control of the country last year and forced the government of Hadi into exile.