Maryam Rajavi: Sanctions force Iranian regime to take one step back in building a nuclear bomb 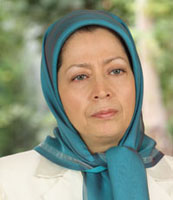 If the international community fails to implement Security Council resolutions, Khamenei will once again move towards building the bomb through deception and cheating

Mrs. Maryam Rajavi, President-elect of the Iranian Resistance, said the “forced” retreat by the religious dictatorship ruling Iran in its nuclear bomb project during the Geneva talks was a direct result of international sanctions and the Iranian people’s widespread opposition to the Supreme Leader’s policies which have undermined Iran’s national interests. The regime views obtaining nuclear weapons as a strategic guarantee for its survival; its overt and covert nuclear projects have only resulted in greater poverty and destruction of the country’s economy, she added.

Mrs. Rajavi welcomed the retreat by clerical regime which was prompted by domestic isolation, international rebuke and sanctions as well as policies and nuclear revelations by the Iranian Resistance during the past three decades.

She added: Since incurable internal crises have severely weakened the Iranian regime, had world powers set aside economic and political considerations and acted more decisively, they could have dismantled the regime’s bomb-making program in its entirety during the current negotiations. Thus, in the future, as in the past, the extent of the regime’s retreat and abandoning nuclear weapons as well as its compliance with international obligations depend precisely on the degree of decisiveness and firmness of the world community vis-à-vis the regime’s evil intentions and its intrinsic deceptiveness.

Mrs. Rajavi warned: The full implementation of Security Council resolutions, particularly the complete halt to uranium enrichment, agreeing to the Additional Protocol, and the IAEA inspectors’ unhindered access to suspected nuclear centers and facilities are essential for the regime to abandon nuclear weapons. As such, the first step can be viewed as the beginning of the process of drinking "a chalice of poison" by the regime on the nuclear issue. Any leniency, hesitancy and concessions by the international community will prompt Khamenei to once again move towards manufacturing nuclear weapons through deception and cheating.

The clerical regime has never volunteered to report its nuclear activities to the IAEA according to the Non-Proliferation Treaty (NPT); the Iranian resistance has been the first party that revealed the regime's clandestine facilities and its nuclear deception.

In this respect, Mrs. Rajavi reiterated the need for the IAEA to immediately inspect the nuclear sites recently exposed by the Iranian Resistance, so as to prevent the regime from modifying them as it has done in the past.

Secretariat of the National Council of Resistance of Iran
November 24, 2013