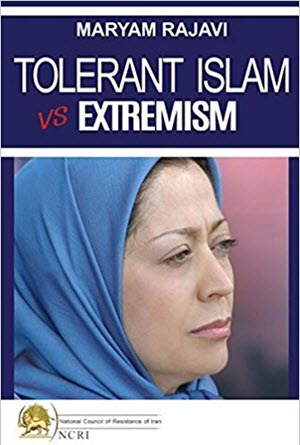 This manuscript is a compilation of an article and excerpts from speeches by the Iranian Resistance’s President-elect Maryam Rajavi, a Muslim woman who has led a relentless struggle for freedom in Iran.

She represents a voice against Islamic fundamentalism and religious tyranny and promotes democratic and tolerant Islam. This book explains the views of Islam on freedom, democracy and its opposition to fundamentalism.

The purpose of this book is not to offer an exhaustive analysis of the phenomenon, but to shed light on and answer a natural question: What is the genuine outlook of Islam on these crimes? Do those who commit such atrocities really represent Islam? The answer is a resounding “no”!

Then, the next question would be: What is the position of Islam on key issues such as “popular sovereignty,” “the principle of freedom” and “resorting to indiscriminate terrorism and violence”?

In the introduction to this book, we read:

Thirty-eight years after an authoritarian regime seized power in Iran under the banner of Islam, quarter of a century after the Persian Gulf war, 15 years after September 11, 2001 and the war in Afghanistan, 13 years after the US invasion of Iraq which opened its doors to the fundamentalists ruling Iran, and in the sixth year of Bashar Assad and the Iranian regime’s bloodbath in Syria, there is hardly any place in the world that has remained safe from the harms of Islamic fundamentalism and the terrorism emanating from it.

The terrorist attacks of January and November 2015 in Paris, December 2015 in California, March 2016 in Belgium, the explosion of a Russian airliner over the Sinai Peninsula in November 2015, and the horrendous slaughter of innocent people in Nice and Normandy in July 2016 in France, clearly demonstrate that this evil phenomenon has not limited itself to Islamic countries.

No one can dispute the fact that suppression of the people of Iraq at the hands of the Maliki government, and carnage and destruction in Syria by Bashar Assad had a significant impact on the emergence, expansion and empowerment of the (ISIS/ISIL). Just as no one can deny the international community’s failure in supporting the people of Syria in the face of Bashar Assad’s war crimes and crimes against humanity, and its silence over the massacre of the people of Iraq by the Iranian regime and its puppet government in Iraq, no one can ignore the fundamentalists’ taking advantage of some shortfalls in Muslim communities in Europe.

Some tend to conflate Islam and extremism, arguing that the present predicament basically emanates from the approach of Islam. They, thus, exonerate the Iranian regime and the governments of Maliki and Bashar Assad or minimize the significance of their roles.

There are also those who shrink the scope of this threat to one sect and highlight Sunni extremism as the main danger, forgetting other aspects of extremism operating under the banner of Islam so much that they propose seeking assistance from Shiite fundamentalists to conquer Sunni fundamentalists. Meanwhile, the convergence of behind-the-scenes interests has made matters even more complicated.

Available to buy on Amazon: http://amzn.to/2r0qAwf