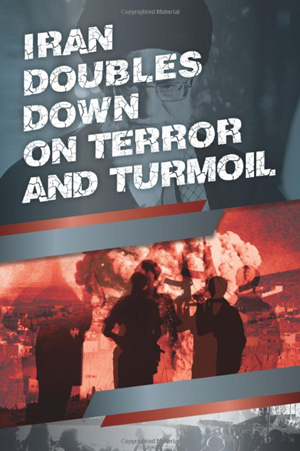 This 66-page book examines the motivation behind the regime’s political and economic strategy by considering three areas: terrorism including in Europe and the United States, incitement of regional conflicts, and the ballistic missile threat.

Failing to quell growing popular protests against their rule, the mullahs have opted to bolster domestic suppression with blatant terrorism and intimidation, particularly against opponents.

The strategy revolves around terrorism and physical annihilation of opponents. It is perceived to be so vital to the regime’s longevity that its officials are willing to risk serious international diplomatic backlash and resources in Europe in a bid to deal a devastating blow to the organized opposition. For the first time in its history, a regime diplomat in Tehran’s embassy in Austria has been caught red- handed directing a bombing operation on European soil, i.e., at a major opposition rally in Paris on June 30, 2018.

The manuscript discusses how all decisions on terrorist attacks abroad, particularly those targeting Iranian dissidents, are made at the highest levels of the Iranian regime. Such sensitive and sophisticated operations require high levels of intelligence, coordination, logistics, and operational skills, as well as the political and diplomatic cover terrorist operatives need. As such the book identifies and elaborates on the key decision-making and executive agencies involved for terrorist operations.

Tehran has escalated its policies of warmongering and meddling in Syria, Yemen, Iraq, and Lebanon, including terrorist training camps run by the Qods Force, the extraterritorial arm of the Islamic Revolutionary Guard Corps (IRGC). The mullahs’ regime has funneled billions of dollars to finance its belligerent war agenda in the Middle East while the majority of Iran’s people are living in poverty.

Tehran is setting up the necessary facilities and equipment for missiles development and launch capabilities. Moreover, it does not just fire missiles into regional countries in pursuit of war; it also exports the necessary missile technology and constructs missile factories outside Iran’s borders. This export of missiles to Yemen and elsewhere contravenes UN Security Council resolutions.

This book includes a list of major Iran sponsored terror operations in 2017 and 2018 in Europe and the United States, as well as organizational charts for the Aerospace Industries Organization as well as Aerospace Force of the IRGC.

Previous articleIran Will Be Free
Next articleIran: Mass Execution of 12 Prisoners

The true story of a young freedom-loving Iranian man The story of "A Little Prince in the Land of the Mullahs" is a graphic...
Read more
Search