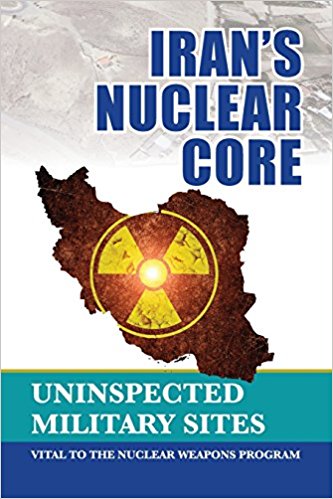 Iran’s Nuclear Core details how the nuclear weapons program is at the heart, and not in parallel, to the civil nuclear program of Iran. The program is run by the Islamic Revolutionary Guards Corp (IRGC) since the beginning, and the main nuclear sites and nuclear research facilities have been hidden from the eyes of the United Nations nuclear watchdog.

The manuscript details the function of the civil program as a support and cover structure for the nuclear weapons program, which has over the years, changed names and modified structure, but was neither ceased, nor had its key experts changed.

The nuclear weaponizations sites are primarily located in large military installations, equipped with large and extensive underground tunnels and facilities shielding the sites from inspections, as well as having the ability to quickly move things around if and when needed.

Universities have provided valuable access to research facilities, cover to hide the real objective of the program, as well as means to obtain dual use technology or attacking experts.

Some of the top nuclear experts who have played a crucial role to advance the program have senior ranks in the IRGC.

Since the 1980s until now, the program has been operated under the direct control and supervision of the highest commanders of the IRGC.

The book includes details of the uninspected sites, satellite imagery of the locations, details of the organization tasked with the weaponization of the nuclear program named, Organization of Defensive Innovation and Research, known by its Farsi acronym SPND, as well as key experts of the program.