Chanting “Death to the Principle of the Velayat-E Faqih, Students and People in Tehran Stage Demonstration, Demand Overthrow of Religious Fascism Ruling Iran 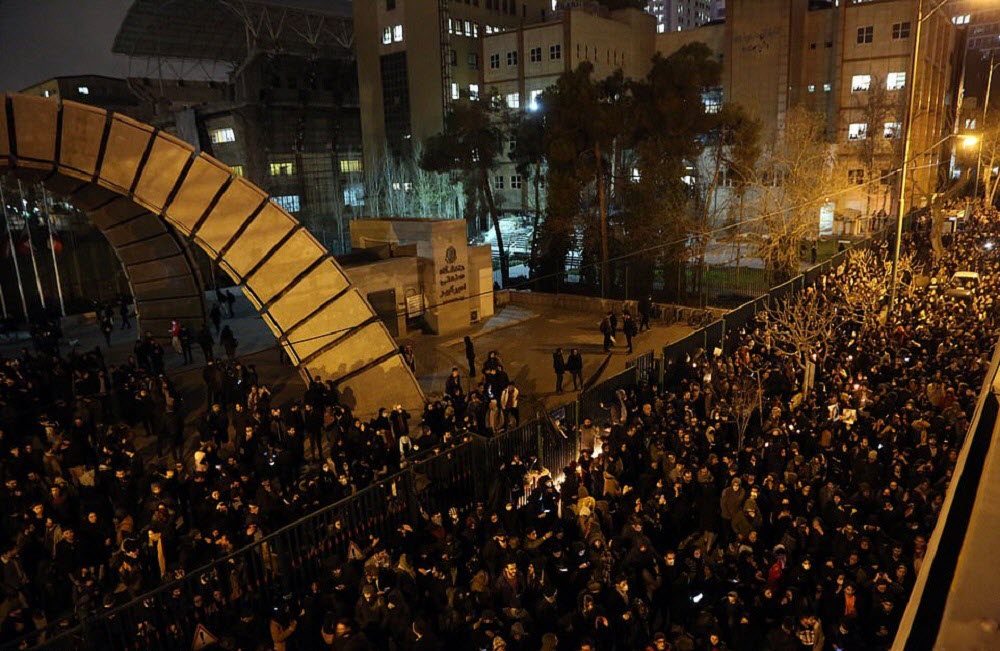 Written by Secretariat of the National Council of Resistance of Iran (NCRI) on 11 January 2020.

A Large number of people have joined the demonstration by the students at Amir Kabir University, which has spilled over surrounding streets.  Thousands of people gathered in Hafez Street and areas around it, chanting, “Death to the dictator,” “Death to liars,” “Have no fear, we are all together,” Death to this murderous regime,” “Don’t call us seditionist, you are the sedition, you the oppressor,” “Death to this theocracy, for crimes in all these years,” “We did not give our lives to compromise and praise the murderous leader,” “Shame, shame to Khamenei,” “don’t call me seditionist, you are the sedition, oppressor,” “1,500 killed in November,” and “Soleimani is a murder, his leader is also a murderer.”

The suppressive forces attacked the protesters and fired teargas. They shut down the gates of the University, locking in those still inside the campus. Female students confronted the anti-riot units and calling them scoundrels. The protesters also tore down the picture of Soleimani.

Simultaneously, a large number of students at Sharif Industrial University staged a protest, chanting, “Death to Khamenei,” “Khamenei is a murderer, his rule in null and void,” “Death to the principle of religious rule,” “Reformer, hardliner, the game is now over,” “Commander-in-Chief of the Armed Forces, resign, resign,” “IRGC commits crimes, leader supports it,” “Our enemy is right here, they lie when they say it’s America,” “I will kill whoever killed my brother,” “Khamenei shame on you, leave the country alone,” “Shame, shame to Khamenei”. The terrified security forces shut down the gates of the University to prevent the students from taking to the street, where people could join them.

Mrs. Maryam Rajavi, the President-elect of the National Council of Resistance of Iran (NCRI), hailed the arisen students and people in Tehran and urged all Iranians, especially the youth, to express support and solidarity with the protesters. She called on the international community to prosecute and punish those responsible. The main culprits, Mrs. Rajavi said, are Ali Khamenei, as the Commander-in-Chief of the Armed Forces, Hassan Rouhani and IRGC commanders.