GOP Lawmakers Push for Sanctions on Iran Regime Over Yemen 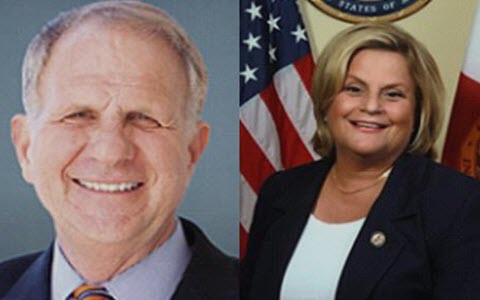 NCRI – Two senior Republican lawmakers are pushing for sanctions on the Iranian Regime based on their destabilizing actions in Yemen as the House of Representatives prepares to vote this week on legislation designed to crack down on Iran’s financing of terrorism and terrorist groups.

Representatives Ileana Ros-Lehtinen (Florida) and Ted Poe (Texas) – both senior members of the House Foreign Affairs Committee- introduced a bill to sanction the Iranian Regime for its support for the Houthi terrorist group in Yemen. The Iranian Regime’s involvement in the Yemeni Civil War has included supplying the Houthis with advanced weapons systems- via the Iranian Revolutionary Guard Corps (IRGC) – that they have used to attack Saudi Arabia and other US interests.

In a statement released on Monday, Poe said: “The Iranians need to be held accountable for the mess and war they are perpetuating in Yemen. This bill will send a clear message to Tehran to stop their activities or pay the price. And that’s just the way it is.”

In 2015, the Houthis stormed Yemen’s capital, and evicted the internationally recognized government. The Saudi-backed military coalition, which is fighting in support of the ousted Yemeni government, has not yet been able to remove the Houthis from Sanaa.

The introductions of sanctions against Iran from Ros-Lehtinen and Poe comes shortly ahead of the House debates on two further bills targeting the Iranian Regime scheduled for this week.

Last month, the House of Representatives adopted a resolution, written by Representative Ro Khanna (California), stating that Congress has not formally authorised US military force in the Yemen conflict and calling for sanctions against Iran for its malign actions in Yemen.

In October, the House also passed laws to expand sanctions on the Iranian Regime for its ballistic missile programme and support for the Hezbollah terrorist group.

These sanctions considerations came just a couple of weeks after Donald Trump declined to certify Iranian compliance with the 2015 nuclear deal, which gave Congress 60 days to debate reimposing sanctions that were lifted under the nuclear deal.

Previous articleA Peek Behind the Curtain of the Iranian Regime
Next articleIran: What Ahmadinejad and Larijani Brothers fighting Over

Iran: Suspicious Death of Shahin Naseri in Greater Tehran Prison, a Prisoner Who Had Testified About Navid Afkari’s Torture