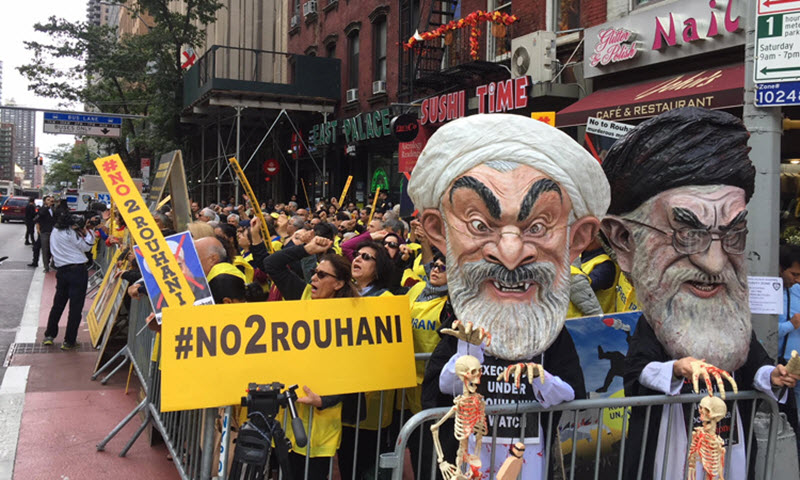 What we are now witnessing in Iran right now is the continuation of an uprising that began in late December 2017, which quickly spread across the country and continues to this day. The Iranian people are fed up with a religious dictatorship that squanders Iran’s national wealth, suppresses its citizens, and continues to execute prisoners. The Iranian Resistance movement is growing in the country, despite the regime’s crackdown.

Gholamreza Heydari, a member of the Iranian regime Majlis (parliament) recently stated, “We occupied the US embassy, which led us to the start of sanctions and the (Iran-Iraq) war began afterward. We insisted on continuing the war even after retaking Khorramshahr. However, when Khomeini accepted the UN ceasefire resolution he described it as ‘drinking from a chalice of poison’. While the reconstruction work had hardly begun after the war, we started work on the nuclear program. This came with a very high price tag and we had to once again accept the ‘heroic flexibility’ in regards to the Iran nuclear deal. The ink on this deal had hardly dried that we started to fire missiles, giving reasons to those seeking to escalate the crisis.” He added, “The severe downfall in the national currency value and skyrocketing prices for basic necessities indicate that the country is not being governed properly. Are we the guardian of the whole world that it is upon us to give blood for others’ sake? The way the country is running is that all the power is in one place and others are held accountable.”

Hossein Salami, Revolutionary Guards deputy chief, remarked, “Our warehouses are full with basic necessities. The nation should increase their tolerance. For the love of God, do not be deceived by the enemy’s media and psychological warfare campaign… Remain calm… Nothing has happened. It is our enemy who should be terrified and shaking with fear…”

These remarks by senior officials should be examined with the new reality of the popular unrest in Iran in mind.

Water shortages, corruption, no free elections, executions, and the disappearance of prisoners all fuel political unrest. A spark will touch off an explosion in Iran. We are witnessing a major change. Many Iranian citizens are asking for an alternative to this regime.

This alternative can be found in the Iranian Resistance, the People’s Mojahedin Organization of Iran (PMOI/MEK) and the opposition President Maryam Rajavi.

Former Mayor Rudy Giuliani, and legal representative for U.S. President Trump, said at an Iranian opposition rally, “Let me read to you something coming out of the regime itself about the PMOI/MEK. ‘Who has the best conditions of seeking to overthrow and the ability to turn this potential into reality? It is talking about the reality of the regime overthrow. Everyone is pointing to the MEK and this is something that Iranian regime Supreme Leader Ali Khamenei has stressed upon repeatedly. So, it is necessary that we identify them, raise awareness about them and, all of us, be serious to confront this real threat’.”

The Iranian Resistance rose up when Iranian regime founder Khomeini began violating people’s rights and freedom. The movement continues to grow, and many of its members have sacrificed their lives to reach this point.
They refused to accept and give legitimacy to religious dictatorship for nearly four decades. The Iranian Resistance is the only serious and lasting entity against the regime, and embodies all progressive and freedom loving groups.
The Iranian regime has led a decades long misinformation campaign against the Resistance, who they fear because it presents a democratic alternative, led by Maryam Rajavi. Mrs. Rajavi is the President-elect of the National Council of Resistance of Iran (NCRI), a known coalition of Iranian opposition forces, with the PMOI/MEK as its core member.

Mrs. Rajavi has spearheaded a worldwide campaign in the fight against fundamentalism and the terrorist-supporting regime of Iran over the last two decades. She has the support from many international, political, and social figures— former military officers, former ministers and current MPs from various countries of Europe, the Americas, the Arab World, and Australia.

Mrs. Rajavi led the transfer of PMOI/MEK members from Camp Ashraf to Camp Liberty in Iraq to Europe, especially Albania, and beyond. This extensive and extended campaign involving many political and security risks.

Now, Mrs. Rajavi is working to get justice for the victims of the 1988 massacre in Iran. She seeks to bring those responsible for this human rights travesty to justice.

With the alternative of the NCRI, victory is certain and Iran will be free.