Obituary to a Mass Killer 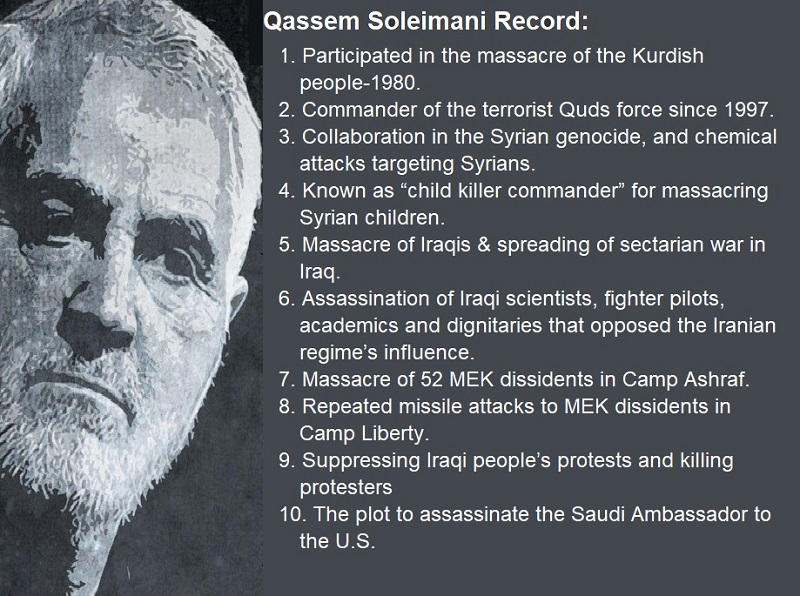 Written by Mansoureh Galestan on 08 January 2020.

Reports in various outlets have mentioned, albeit in vague and unclear form, huge funeral ceremonies held in Iran to honor the slain Quds Force commander Qassem Soleimani. These reports tend to refer to an outpouring of grief among the authorities and the population.

BBC World Service coverage of the funeral alternately mentioned “thousands,”  “hundreds of thousands,” or even “millions” of Iranians paying tribute to Soleimani as a “fallen national hero.” Evidence for these figures generally took the form of video clips from official state media broadcasts.

In an extraordinary session of Iran’s State Security Council attended by Supreme Leader Ali Khamenei and held hardly a day after Soleimani’s demise, authorities discussed the consequences and measures that they felt needed to be taken. The most urgent among them: holding a “huge” funeral ceremony to partially compensate for the loss of power inflicted on the regime by Soleimani’s death.

An unprecedented mobilization all over the country began the same day.

Every single person in the armed forces, security apparatus, government institutes, and government-owned entities was compelled to participate, along with their whole family.

“All educational centers for applied sciences in Khorassan province are closed on Sunday, January 5, in order to permit full participation by the personnel along with other social classes in the funeral ceremonies,” read a circular issued a day after Soleimani’s death by the country’s University for Applied Sciences.

A mass SMS sent to citizens of Shiraz, one of the country’s biggest cities in the south, proposed that “in order to participate in the funeral ceremonies held in Kerman (Soleimani’s birthplace where he would be buried about a thousand kilometers away from Shiraz), free bus services were organized from Shiraz bus terminal Monday, January 6 to come back Tuesday evening, with free breakfast, lunch and dinner being served.” Women and men were to be transferred in separate buses.

On Monday, all stores in Kermanshah, western Iran, were forced to close down, and students were obliged to take part in the ceremonies. Taxis were forced to stick Soleimani’s photos on their windshields. A lot of posters and leaflets with the same photographs were diffused by the government in town.

In Varamine province close to Tehran, authorities announced that free dinner would be offered for those taking part in the ceremonies held at the governorate’s premises.

In the huge Gohardasht prison in Karaj, all administrative personnel, 90% of the medical staff, 70% of the protection and security personnel, 60% of prison guards, 90% of the technical staff, all magazine personnel, 80% of services’ personnel and 40% of the kitchen personnel were forcibly sent to the obituary ceremonies.

An official form was distributed Sunday morning in Tehran’s primary schools. The pupils had to write down, in their handwriting, a text read to them by their teacher in praise of Qassem Soleimani. The form, along with required teacher comments, is to be kept in each student’s record. Pupils were asked to take part in the funeral ceremonies after having filled the form.

A school director continued calling all personnel asking them to take part in the ceremonies and to take selfie photos as proof of participation, in order to be compensated.

And these are only a few of the thousands of measures taken in support of the propaganda goals outlined by the mullahs’ State Security Council. But precise information from inside the country shows that less than 5% of the population in big cities actually took part, with the total percentage in the country reaching not more than 10%.

“Inscription forms” for volunteers of kamikaze operations distributed in mosques and schools were met with even less enthusiasm.

In fact, such efforts are nothing more than measures meant to give the IRGC’s forces a minimum boost in morale in the wake of a decisive blow.