Iran’s Regime in Terminal Decline, Panicking About Losing Its Grip on Power

Written by Struan Stevenson
11th May 2020 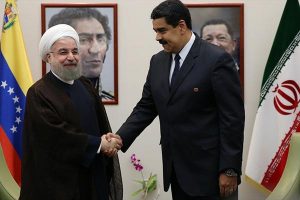 By: Struan Stevenson
When the disintegrating socialist state of Venezuela, where the people are starving, starts flying planeloads of gold to the collapsing theocratic regime of Iran, the world should sit up and take notice. Due to their status as international pariahs, both of these oil-producing nations are under US sanctions, banning their ability to export oil. Now the plummeting value of crude, down to less than $1 a barrel due to the coronavirus pandemic, has deepened their respective economic woes.
The Venezuelan dictator Nicolás Maduro, through a combination of scandalous maladministration and venal corruption, has crushed his once-prosperous country, leading to the mass exodus of Venezuela’s professional class, fleeing from the crisis-plagued nation that now faces severe poverty. Desperate to restore one of his decaying oil refineries on Venezuela’s north-western coast, to prevent Venezuela from running out of gasoline altogether, Maduro sought help from his fellow dictators in Tehran. In exchange for their help, the mullahs demanded gold.
In the last week of April alone, six planes from the sanctioned Iranian carrier Mahan Air were seen flying in and out of Simón Bolívar International Airport near Caracas. Iran’s Mahan Air is run by the regime’s Gestapo-like Islamic Revolutionary Guards Corps (IRGC), a listed terrorist organization. With the Venezuelan currency virtually worthless, Maduro had to loot his country’s last gold reserves to pay his terrorist friends. Around nine tons of gold worth an estimated $500 million dollars has been shipped to Tehran, leaving Venezuela with hardly any remaining hard currency reserves.
US Secretary of State Mike Pompeo said: “These flights must stop and countries should do their part to deny overflights just as many have already denied landing rights to this sanctioned airline.” Pompeo is right to be angry. The unholy alliance between Venezuela and Iran, as the mullahs seek to prop up their most strategic partner in the West, poses a threat to world peace. Since the 1979 revolution that brought them to power, the Iranian regime has sponsored global terrorism and financed regional conflict.
The world can rest assured that none of the Venezuelan gold will find its way toward helping the Iranian population, 70% of whom are desperately struggling with income levels below the international poverty line, against the background of a Covid-19 contagion that has spiraled out of control, already accounting for more than 40,000 deaths.
Instead, the mullahs will continue to divert vital resources to propping up Bashar al-Assad’s bloody civil war in Syria, backing the Houthi rebels in Yemen, the vicious Shi’ia militia in Iraq and the terrorist groups Hezbollah in Lebanon and Hamas in Gaza. Anything left will find its way into the pockets of the Ayatollahs, who match their Venezuelan chums for unprincipled corruption. There is certainly no honor among thieves. A regime that sends its military thugs and even its diplomatic staff to kill and maim innocent civilians at home and abroad has removed itself from the norms of civilized behavior.
Now, in a bid to subdue simmering resentment at the unbearable economic conditions inside Iran and the regime’s lethal bungling of the coronavirus pandemic, the mullahs have begun a new wave of executions. Last month, the authorities put to death at least 32 individuals in 14 cities. Those hanged included political prisoners, juvenile offenders, and members of ethnic minorities. The situation in Iran’s medieval jails is grisly, with many prisoners, especially the thousands of young students arrested during last November’s nationwide uprising, contracting the virus, and being denied medical help.
We have accurate information on the spread of the coronavirus and in particular of the dire conditions in Iran’s prisons, provided daily by courageous resistance units of the People’s Mojahedin Organisation of Iran (PMOI/MEK), active in every town and city in the country. We know that in the notorious Evin Prison in Tehran, hundreds of prisoners are exhibiting dry coughs, fevers, shivering, and diarrhea. But the regime has refused to release them, quarantine them, or treat them. Similar conditions are occurring in prisons across Iran, leading to riots and mass breakouts. Recaptured prisoners have been executed within days. The regime is terrified of another revolution that will sweep them from power, so they have resorted to daily hangings during the holy month of Ramadan.
Even students and young protesters who took part in demonstrations against the downing of the Ukrainian airliner in January have been sentenced to flogging and long jail terms. The mullahs’ cyber-police have arrested thousands of people who have posted online information revealing the truth about the Covid-19 contagion. They have been accused of being enemy agents trying to damage Iran’s reputation by spreading false rumors about the virus. The theocratic dictatorship is displaying all of the signs of a regime in terminal decline, terrified of a popular uprising and panicking about losing their grip on power. The fact that they must now rely on looted gold from Venezuela is a key symptom of their desperation.

Previous articleLatest News in Brief – May 11, 2020
Next articleRouhani’s Acknowledgement That 100 out of 120 Prisoners Are Infected With COVID-19 Shows How Deplorable Iran’s Prisons Are