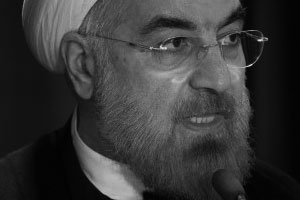 NCRI – One of Khamenei’s faction newspapers, “Resalat” in a May 15th editorial warned the existing regime’s president, who is running for reelection, Hassan Rouhani, “The path you stepped in will result in intrigue and an uprising.”

This editorial also referred to Rouhani’s campaign and his comments on the campaign trail. “The seating president wants to attract a few more votes to continue sitting on the chancellory bench at any price, even questioning the national authority or (government’s authority) and endangering national security (regime’s security)…Some of your statements in the debates and campaign speeches at political rallies are virtually opportunistic and provide material and tools for the enemy and destroy opportunities for the country …

Tarnishing the country’s military authority and saying, ‘Showing underground missile sanctuaries was a disruption of the JCPOA.’ They are signs of no understanding of the country’s sovereignty and national security. Being afraid of an enemy and not even allowing satellites to be launched, which are products of young scientists’ activities, and hoping that the enemy might feel pity for us and will act upon its JCPOA obligation is only a wishful thinking.”

Rasalat added: “Who is Mr. President really consulting with in designing his political messages. Who were the president’s audience for this speech in Hamedan to gain votes? When he speaks in defense of sedition leaders or punishment of the enemy of God in the past four decades, including (MEK), monarchists and counter revolutionaries, undermines the opportunistic tools for enemy or friend? Which one?!”

Then, Resalat concludes, “Intrigue arises from the way you go, not an election that will bring security for the Iranian regime.”

Javan, the paper of the regime’s militias affiliated with IRGC, also warned Rouhani on the consequences of his election campaign in its editorial on Monday, May 15th. “Competing with the system, instead of competing with a rival, to attract opponents and the votes of families of executed ones and the MEK, you charged your rival with 38 years of execution. Everyone knows that charging your rival with execution is irrelevant. The foundation of the system is targeted. Because, executions and the religious form of it, “revenge” is God’s order. It is absolutely necessary and must be performed, such as managerial duties, it cannot become obsolete and subject to personal opinions.” This IRGC affiliated newspaper went on to attack Rouhani, writing, “Gathering all designers of the 2009 intrigue (2009 uprising) under his flag (Rouhani) is another reason for their competition with the regime……Along with the above measures, the legal team of the executive branch complain every day about a few media to quiet them and to be able to shut down the outlets critical of his actions and then, things will be easier to go on with.”

Then, an IRGC affiliated militia’s media wrote, “We wish Mr. Rouhani to become certain of his victory and quit his disgusted competition with the regime and compete with his rivals instead and instead of creating fear of his rivals, he concentrated on the election’s issues and his portfolio with avoidance of fainting in the transaction.”