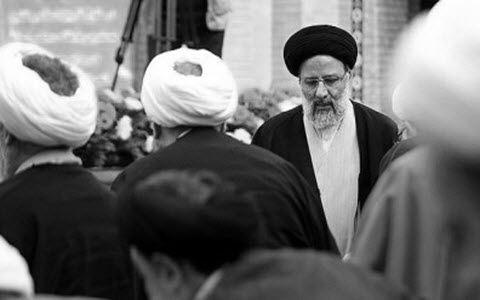 NCRI – The hysterical reactions of the Iranian regime’s officials and state run media from the rise of the movement seeking justice for the 1988 massacre and its effect on the increase of crisis as the regime nears its presidential election still continues.

Seyed Ghassem Yaghoubi, Neyshabour’s Friday Prayer leader stated, “How is it that someone who destroyed the PMOI from its roots becomes the bad guy?”

In reaction to the justice seeking movement for the massacre of 30,000 political prisoners in 1988, one of Khamenei’s henchmen, pointing to Ebrahim Raisi who was a member of Khomeini’s death committee in the 1988 Massacre and said: “for some time now some are trying to create hype against one of the Presidential candidates regarding the 1988 executions.”

While pointing to Montazeri’s statement, (Khomeini’s heir at the time), which labeled Ebrahim Raisi and other members of the death committee as the worst criminals, he ridiculously claimed: in order for Mr Montazeri not to make an undeliberate opposition, some officials went to his house to explain him about the executions.

Reuters News Agency reported on the Iranian regime’s Presidential debate stating this was the last debate in which Rouhani hit out at his hardline opponents in a final televised debate on Friday against challengers who aim to topple him in an increasingly acrimonious election next week.

Reuters added, Rouhani said during the debate, in an unmistakable swipe at the Revolutionary Guards Corps, an elite military force with a vast business empire, which has backed his main hardline opponent Ebrahim Raisi, “If we want a better economy, we should not let groups with security and political backing to get involved in the economy.”

“(you are) those who cut out tongues and sewed mouths shut,” Rouhani told a rally on Monday in a thinly-veiled attack on Raisi, a former jurist involved in mass executions of political prisoners in the 1980s.

“Our people will not vote for those who knew only executions and prison for 38 years,” Rouhani said in a rally on Tuesday.

Indicating Khamenei’s fear of a new uprising, Reuters stated, Iran’s ultimate authority Khamenei has warned the public against protests like those that broke out after the disputed election of 2009.

France 24 reported in the final days leading to the elections in Iran which will be held on 19th May, government officials have expressed their fear of workers and the poor not participating in the elections due to disappointment and despair.

France 24 added, in Molavi district which is one of Tehran’s old quarters and its residents are comprised of workers and low income families, they are weary of the elections. Government officials fear that residents of such impoverished areas will boycott the elections.