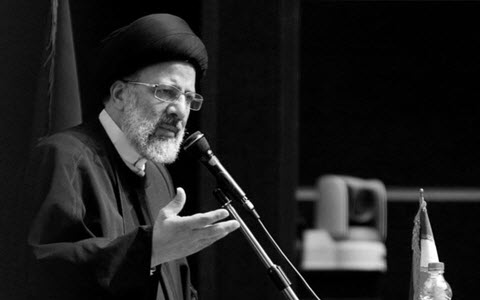 NCRI – Ebrahim Raisi, one of the main perpetrators of the 1988 massacre and a candidate in the recent sham presidential election in Iran, delivered a speech on Sunday in Mashhad, northeast Iran, lashing his remarks at President Hassan Rouhani.

“The government must set aside this begging foreign policy. The fact that you send a message to the enemy that our country’s treasury is empty is wrong. To say everything is dependent on the nuclear deal, even the people’s drinking water, is wrong…” he said.

“The events of these elections were unprecedented; all the country’s assets, ministries, governorates, clinics and … were election headquarters for the government’s candidates. Dozens of chain newspapers were working for the government and continuously insulting the rivals, while the Quds Astan daily was banned from any election coverage,” he added.

“This money distribution, subsidies even for people whose subsidies had been cancelled, and repaying the debts of farmers who had been demanding their money for years, on the night of the election, these were all measures resorted to by specific candidates in taking advantage of government assets,” he added.

Previous articleIran: Former Regime’s President’s Son Sacked From University Board
Next article70 Percent of Construction Workers out of Work Due to Iran’s Recession in Housing Sector