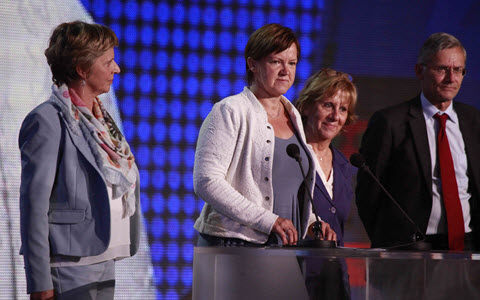 NCRI – A Belgian politician has hailed the Iranian Resistance for its commitment to gender equality, as demonstrated in their leadership and their ten point plan for Iran, during her speech before the Free Iran Gathering last weekend.

She said: We are very much concerned about violations of women’s rights and the rights of minorities in Iran. On the gender global gap index Iran is ranked 139 out of 144 countries, and that is to be ashamed of.
The gathering, organised by the People’s Mojahedin Organization of Iran (MEK), an activist branch of the Resistance, and the National Council of Resistance of Iran (NCRI), which serves as a government-in-exile, was attended by over 100,000 people with many more watching at home.

The Free Iran Rally had the overarching theme that regime change in Iran was not only necessary but imminent. The previous methods of appeasing the Regime and negotiating with them have clearly failed to bring the mullah’s Regime in line with the rest of the world.

She also reminded everyone that the acts of Islamic extremism and terrorism are not committed by Muslims, but by terrorists.

She said: “You know that my country, Belgium, has been a victim of criminal acts of extremists who acted in the name of Islam. But your PMOI as a Muslim force represents a democratic and tolerant Islam. Your resistance shows that Islam and democracy are compatible. The same is true for women’s rights and Islam.[Your] interpretation of Islam challenges a radical Islam and their dogmatic interpretation of the Quran. This gives us a lot of hope for the future of Iran and for the world.”

She expressed her hope for the freedom of Iranians and promised to do her part by advocating for the Belgian Parliament to support the Resistance.

The Resistance’s commitment to gender equality and the rights of women was also detailed on Iran Focus yesterday in an article titled: A woman’s place is in the (Iranian) Resistance, which correctly identified that in many social justice movements, women are sidelined in favour of charismatic men.

It read: “In many movements for social change or social justice, women are there doing a lot of the grunt work and getting none of the praise. Thankfully, this is not the case in the Iranian Resistance’s struggle for freedom. Dedicated to gender equality and with a female President at the helm of the movement, the Resistance makes it clear that women are not only an integral part of the movement, they’re also highly visible within the movement.”