Newt Gingrich at Free Iran Rally: “You Will Someday Be Proud to Say You Were a Part of What Freed Iran” 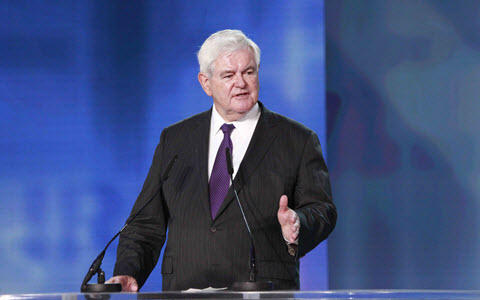 NCRI – On Saturday, July 1st, The National Council of Resistance of Iran (NCRI) held their annual “Free Iran” rally, which was attended by some 100,000 people, including hundreds of high ranking political supporters from the US, the EU, and dignitaries from around the world.

One of the speakers at the event was Newt Gingrich, who served as the 50th Speaker of the United States House of Representatives from 1995 to 1999. In 2012, Gingrich was also a candidate for the Republican Party presidential nomination. His message was simple, he said, “Iran must be free.”

He continued, “The dictatorship must be destroyed. Containment is appeasement, and appeasement is surrender. The only practical goal is to support a movement to free Iran.”

Gingrich said that “a dictatorship that appoints as its justice minister someone who killed 30,000 people is telling you everything you need to know about the core nature of the dictatorship.” He criticized Iran’s regime for not only the 1998 Massacre of 30,000 people, but also for the election process where candidates are chosen by the Guardian Council, who vets all candidates, and approves only a handful, giving the Iranian people a choice that is limited to between bad and worse. He talked about the way the regime threatens its dissidents, with jail at best and death at worst.

Dictatorships like the one in Iran threaten freedom anywhere according to Gingrich, who called Iran the largest supporter of state terrorism in the world. Is the Iranian dictatorship. He praised the Trump administration, in particular, Secretary of Defense Mattis, and the National Security Advisor, General McMaster, for their lack of illusions as to the nature of the Iranian dictatorship.

Gingrich praised the growth of the Opposition movement, and said he was impressed with such victories as the removal of 3,000 people from Camp Liberty to the safety of Albania.

He called the NCRI’s president-elect, Maryam Rajavi, a charismatic leader in the same tradition of fighters for freedom as Washington, Lafayette, and Garibaldi, and said that we are committed to the same side, as allies, and pledged to prepare the Trump administration to “get ready to do everything it can to help freedom win and dictatorship lose in the great struggle that is underway in Iran.”
In closing, Gingrich said, “Freedom comes with enormous effort. And it doesn’t come quickly,” and added, “You are mobilizing by your courage and your determination and your commitment and you’re talking with other people, you’re mobilizing an army. A bigger army than we had when we fought for our independence. And this army is bigger than the people in this room. I know, I see them all across America. So I believe we will win. I believe we will win together. I believe we will win for freedom. And I believe you will someday be proud to say you were a part of what freed Iran.