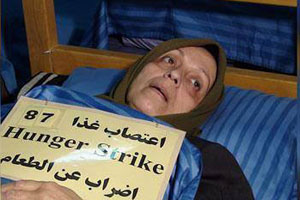 Hundreds of members of Iranian opposition the People’s Mujahedeen of Iran (PMOI/MEK) in Camp Liberty, Iraq, are entering their 13th week of hunger strike in protest of the September 1, 2013 attack on Camp New Iraq, formerly Camp Ashraf.

Residents of Camp Liberty have refused food for nearly 90 days and drink only water and tea and consume only sugar and salt packets. Dr. Hassan Jazayeri, a doctor overseeing the hunger strikers is very concerned for their health, “The hunger strikers’ lives are in danger and at any moment they might face sudden death,” he said.

This past week, according to Dr. Jazayeri and other Camp Liberty physicians, 200 hunger strikers were placed under medical care. Seventy of these individuals are in serious and critical condition. The hunger strikers are suffering from a variety of symptoms including: insomnia, headaches, dizziness, numbness, organ contractions, chest pain, loss of consciousness, diminishing vision and hearing, muscle, bone and joint pains, tachycardia, fever, and hypotension.

Camp Ashraf, an Iranian refugee camp located outside of Baghdad was attacked by Iraqi forces on September 1, 2013. A total of 52 members of PMOI were killed in the attack, where 42 survivors and eyewitnesses said Iraqi security forces stormed the camp and brutally executed unarmed civilians. An additional seven residents were taken hostage, sparking international outrage and hunger strike protests.

On Monday, November 25, a number of compatriots and families of martyrs and PMOI members in Camp Liberty began their hunger strike in front of the White House in Washington to demand the immediate intervention by the US President and Secretary of State to secure the release of the seven Ashraf hostages.

At the same time, the hunger strike in Camp Liberty, Geneva, London, Berlin, Ottawa and Melbourne has entered its thirteenth week with fresh volunteers joining the protest. Since last week, fellow Iranians in Italy and Sweden have also begun hunger strikes in Rome and Stockholm.

Mrs Maryam Rajavi, President-elect of the Iranian Resistance, once again asked friends of Camp Ashraf and PMOI members imprisoned in Camp Liberty, who are in a critical condition and close to death in the cities of Geneva, Berlin, Ottawa and Melbourne, to end their hunger strikes, especially because new volunteers have arrived that carry on their protest.

Despite repeated requests and special messages from Mrs Rajavi, the hunger strikers have continued to refuse food and medical treatment in their ongoing protest to secure the release of the hostages.