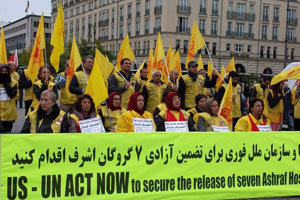 NCRI – The Iranian hunger striker in Geneva, Switzerland and Berlin face critical condition and are in great danger after refusing to eat for over two months.

The hunger strikers in Geneva have passed their 79th day in the cold weather with snow and rain. They have become very lean and weak and some have been transferred to the hospital.

The hunger strikers have their demands written on placards that they carry.

“We continue our hunger strike even in the worst weather condition and severe cold, but we will continue until the 7 Camp Ashraf hostages are released…,” said one of the hunger strikers with a very low tone and hardly being able to speak.

In Brandenburg square, Berlin, outside the American Embassy many Iranian dissidents are also on hunger strike, demanding U.S. to act to release of the 7 hostages.
Despite their critical health and weakness and the very cold weather, they chant, “free the 7 hostages, Now, Now, Now”, “US must act! Camp Liberty needs protection” and “the release of 7 hostages is in the hands of US”.