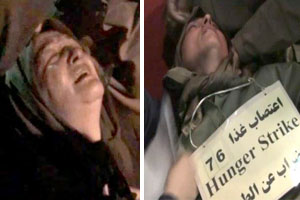 NCRI – As the hunger strike by Iranian dissidents in Camp Liberty, Iraq, has entered its third month, the physical condition of many hunger strikers has become critical.

On the 76th day, two female hunger strikers at Camp Liberty became very ill and were transferred to the Iraqi clinic at the camp.

On female hunger striker was transferred to the hospital for severe pain in the chest and high rate of heartbeat of up to 150 in a minute. After she was examined and cardiograph was taken from her, it was recognized that she suffered tachycardia and ischemia.

Another female hunger striker, was also transferred to the clinic due to severe dehydration and difficulty in breathing. After examination, her blood pressure showed 18 over 12 and her heartbeat rate was 120 in a minute. Her condition has not become stable yet, and she is under direct medical care.

Following the September 1st attack at Camp Ashraf, where 52 members of Iranian opposition movement, the People’s Mojahedin Organization of Iran (PMOI / MEK) were killed and 7 taken hostages, many Iranian dissidents in Camp Liberty, Iraq and across the world went on hunger strike demanding the release of 7 Iranian dissidents abducted by Maliki forces and the presence of UN blue helmets at Camp Liberty.

Previous articleIranian Resistance to reveal another secret nuclear site in Iran on Nov 18
Next articleBritish MPs call for inquiry into Iraqi forces slaughter at Camp Ashraf, release of hostages