Call for Protest Against Shutting Down Telegram by Iran Regime 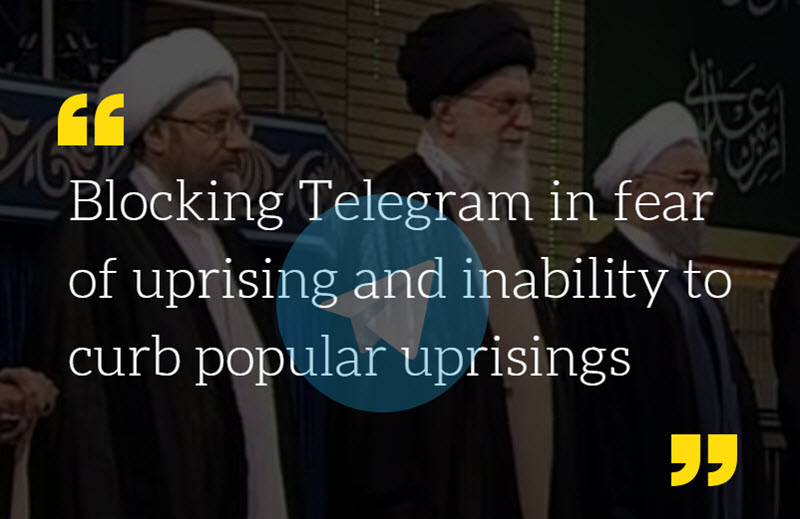 On Monday, April 30, Iran’s judiciary stated: “All Internet service providers in the country … are required to apply the full blocking of the website and application of the Telegram social network starting April 30, 2018 …. Blocking should be implemented in a way that the content of this network will not be available in the country with any software (including anti-filter, etc.). Defying this order will be subject to prosecution.”

Iran’s criminal rulers’ resort to the widespread crackdown on the Internet, first and foremost, is due to the regime’s fears of a flare up of popular uprising and its inability to cope with the protests that have continued and expanded in spite of massive repressive measures. Judiciary statement has described the reason for blocking the telegram as the youth’s employing this network “in the turmoil of January 2018” and organizing and guidance of “many counter security measures” and “propaganda against the system through this messenger.”

The judiciary’s statement clearly shows that various factions of the regime, including Rouhani and his cabinet, have participated in this repressive decision. According to the statement, “the subject has been discussed at various expert meetings with the presence of experts and representatives of relevant organizations, and they have also stated their expert opinion on the need to block and prevent the continuation of this network activity.”

Sadegh Larijani, the Iranian judiciary chief, said a few days ago: “Social networks are now used by the arrogance and the PMOI to undermine the pillars of the system.” (ILNA State News Agency-April 25). The IRGC news network, FARS, described Telegram as a means to threaten national security and to cause revolt, turmoil, disappointment and incitement to pessimism in the society.

Aladdin Borujerdi, chairman of the National Security and Foreign Policy Committee of the Iranian parliament, said: due to “the destructive role it played in the last year’s crises in the country… (issue of) Telegram is tied to the security of the system… and (it) has specific security threat to the Islamic Republic”, and the decision for blocking it “is taken at the highest level.” (State Television – 1 April 2018)