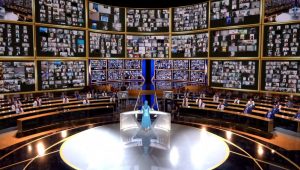 This afternoon, the annual gathering of the Iranian Resistance was held and attended by advocates of a free Iran, supporters of the Iranian Resistance, and Iranians who seek the overthrow of the ruling religious fascism in Iran. The online gathering connected Iranians at 30,000 locations in Iran, in Ashraf-3 in Albania as well as in more than 100 countries on 5 continents. In addition, in compliance with restrictions imposed due to coronavirus pandemic, a large demonstration in Berlin was held and rallies and demonstrations by Iranians in various cities around the world also joined the gathering.

About 1,000 dignitaries, including political leaders, parliamentarians, cultural and religious figures participated in the gathering, supporting the Iranian people’s call for the overthrow of a religious dictatorship and Mrs. Maryam Rajavi’s 10-point plan for a future Iran.

Mrs. Maryam Rajavi, the President-elect of the National Council of Resistance of Iran (NCRI), began her speech at the rally by saluting the rebellious people of Behbahan as well as the millions of compatriots who rose up in a tweet-storm to show their outrage against the inhumane death sentences of young protesters arrested during the November uprising. Last night, the people of Behbahan staged protests, chanted against the regime, and confronted the onslaught of the repressive forces.

In her remarks, Mrs. Rajavi emphasized that from all indications, the ruling theocracy is in a position to be overthrown. The people and the Iranian Resistance are committed to building a democratic and free Iran. She said: We do not seek power at any cost, we seek freedom and justice and a democratic, secular, and non-nuclear republic. Our people must enjoy the right to be healthy, to have shelter, employment, to organize and form syndicates, to have autonomy of ethnic minorities, the right to equal participation in running the society’s affairs, gender equality and popular sovereignty, and an Iran where there will be no capital punishment.

Reminding that so far, the coronavirus has taken the lives of at least 72,000 people in Iran, Mrs. Rajavi said: The abnormal surging trend of the number of coronavirus victims in Iran is a product of the criminal policies of (the mullahs’ supreme leader, Ali) Khamenei and (his president, Hassan) Rouhani. The strategy of launching mass casualties as a barrier against the threat of an uprising and eventual overthrow is exactly designed to pacify and dishearten the Iranian society, rendering it hopeless and paralyzed. They sent people back to work without offering them any help in prevention and treatment. At the same time, they blame the people for the spread of the virus, claiming that they did not observe the hygienic protocols. The mullahs have destroyed the health foundations of the country. The regime’s Health Minister says that since the beginning of the outbreak (in February), for the first time only 300 million Euros was provided to the ministry in June. That is only 3.5 Euros per person to confront the pandemic. The meager sum cannot be compared with any other country. But even this limited budget is squandered in the regime’s labyrinths of pervasive corruption, while the 15 institutions and foundations under Khamenei’s control have a total of one trillion dollars in assets.

Referring to the start of the trial of the clerical regime’s diplomat and his three accomplices in Belgium for the terrorist plot to bomb the Iranian gathering at Villepinte in June 2018, she said: For the first time, a trial has been held for a serving diplomat-terrorist. However, the real masterminds, namely Khamenei, Rouhani, Zarif, and Intelligence Minister Mahmoud Alavi, must be also prosecuted. This is indispensable to stop the mullahs’ unbridled terrorism the mullahs. She urged all governments and international communities to side with the people of Iran, in confronting the biggest threat to global peace and security. 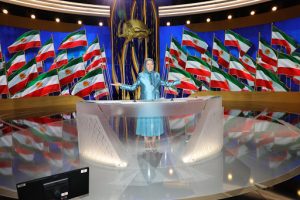 Previous article
Live Report: NCRI’s Free Iran Global Summit
Next article
The Uprising of the People of Behbahan With the Slogans “We Do Not Want the Mullahs’ Rule” and “the Mullahs Must Get Lost”