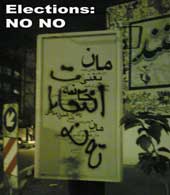 Iran opinion poll: 92 percent of eligible voters will stay away from presidential election
Organization of Iran on the upcoming presidential election were announced today. According to the survey of 1,730 eligible voters in various provinces, 92 percent said that they would boycott the polling on June 17.
The results of a nationwide opinion poll conducted by the People’s Mojahedin

Among the eight percent who said they would vote, 58.8 percent favored Hashemi Rafsanjani, former president of the regime, 37.5 favored Ali Larijani, chair of the state-run television. The remaining voters would go for others including Moeen, Qalibaf and Mehr-Alizadeh.
Among all those interviewed only one said would vote for Mehdi Karoubi, former Majlis speaker.
Secretariat of the National Council of Resistance of Iran
June 1, 2005