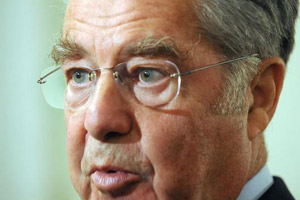 Austrian Foreign Minister Sebastian Kurz, during his visit to an Iran under the rule of the mullahs, made the following repugnant statement: The West should involve Syrian President Bashar al-Assad in the fight against Islamic State, “We need a pragmatic common approach in this respect including the involvement of Assad in the fight against Islamic State terror”… in this fight we are on the same side.

Austrian President Heinz Fischer made similar remarks for Iranian regime’s newspapers prior to his visit to Iran to curry favor with the criminal mullahs ruling Iran. He expressed hope to find a solution to the bloody conflicts in Syria, Iraq and Yemen and that Iran, as the regional superpower, may play an important role here.

He went so far in appeasing the mullahs that in his meeting with the head henchman of the Judiciary who is the highest authority responsible for executions, tortures and suppression in Iran after Khamenei, he disgustingly stated: ‘We have come to Iran with wide open eyes… Since we have no infrastructure called the judicial branch in our country, it is very important for us to benefit from the viewpoints of your judicial authorities.’ Such statements only encourage the Iranian regime in its executions, tortures and slaughters.

Of course he made no attempt to hide his objective from his praises for the religious fascism ruling Iran that is the foremost factor in the crises and slaughters in Syria, Iraq and Yemen and has the highest number of executions per capita in our world today. He said that the Austrian companies are quite interested in working with Iranian companies to benefit from the large capacity of Iran’s market. The terrorist Quds Force news agency quoted Austrian papers on September 8, 2015: Austrian Deputy Chancellor and Economic Minister has stated that until 2020 we want to increase trade with Iran fivefold.

Statements such as having Assad participate in the fight against ISIS, allowing the Iranian regime – dubbed by Iranian people “godfather of ISIS” — to play a role in regional crises, and praising the so-called “judiciary” which is the machine of execution and torture in Iran, are all prepayments for participating in a demeaning race to acquire more contracts after the nuclear deal. The outcome of this opportunistic policy is nothing but deepening crises and further bloodshed in the region and further increase in the wave of refugees. This is while everyone knows that the source of the current crises, especially in Syria, Iraq and Yemen, is the religious fascism ruling Iran that advances its objectives through its proxies such as Assad, Maliki, Hezbollah and the Houthis.

Turning a blind eye to the catastrophic situation of human rights in Iran and praising those who should be tried for crimes against humanity only raises the abhorrence of the peoples of Iran and the region. This is a regime that has 120000 executions of political prisoners, including the massacre of 30000 political prisoners in the summer of 1988, in its sinister record and has executed 2000 people just during Rouhani’s tenure. Amnesty International reported close to 700 executions in the first six months of this year in its statement of July 23: this “paints a sinister picture of the machinery of state carrying out premeditated judicially-sanctioned killing on a mass scale”.

Travelling to an Iran under the rule of the velayat-e faqih system, ignoring its crimes, and making concessions to it under any pretext only earn the strongest condemnation of the Iranian people and their Resistance and are utterly unacceptable. Just as the Iranian people will not forget the atrocities committed during the evil era of the theocratic tyrannical rule, they will also remember those who rushed to support and cooperate with the murderers of the Iranian people during the arbitrary and collective executions.