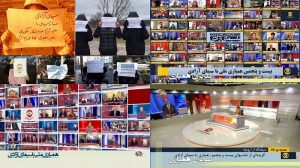 Taking security risks, and despite the COVID-19 conditions, brave youth from all over Iran, joined the Telethon, while expressing support for the MEK and the Iranian Resistance against the religious fascism ruling Iran

During this period, 12 presenters were joined by 88 guests in 10 different studios in five different countries in the 50-hour Telethon, while 100 telephone lines, as well as Internet chats and messengers, video connections like Zoom and Skype were used to communicate with the callers. Simultaneously, there was an uninterrupted social media campaign, using the #FreeIranTelethon (and in Farsi, #همیاری), to give live coverage to the Telethon while accepting contributions via secure connections. Messaging applications like Telegram were also used.

Despite increasing the communication means and platforms, even with the extension of the program, still, many compatriots could not connect due to the high call volume or had to wait long hours to connect. Some faced interruptions due to technical problems.

The total amount of pledges and contributions in this 50-hour Telethon, amounted to 6,532,500 US dollars. Non-cash gifts, including artistic masterpieces, gold or carpets and jewelries are not included in this amount. The significance of this year’s Telethon in comparison to previous ones was that these contributions were made at a very difficult financial situation due to Coronavirus pandemic, which has resulted in many people losing their jobs.

Nonetheless, the most inspiring feature of the four-day Free Iran Telethon on Iran-NTV was the successive calls by compatriots and Resistance Units members from cities across Iran and on the other hand the support and devotion of Iranians living abroad and their support for the Resistance Units, urging them to continue the struggle to achieve freedom and democracy for Iran.

They underscored their steadfastness vis-à-vis the clerical regime and renewed their pledge with the martyrs of the November 2019 uprising and the 30,000 martyrs of the 1988 massacre. All of them said despite the hardships the regime has imposed on them, they will continue their tenacious struggle to the end and establish democracy and freedom in Iran.

Our compatriots, who took great risks to reach out to Simay-e Azadi (Iranntv), described the television channel as the “voice of the uprising and Resistance Units,” the messenger of “the martyrs,” “the reflection of the Iranians’ pent-up anger,” “the light that brightens their homes and Iran,” “echoing the pain and the suffering of the Iranian people, who have been taken hostage (by the regime),” and a “light which brings hope and passion to hearts and homes.” They also offered their sincere gratitude to Iranntv for its precise and uncensored reporting of realities, including the news on the Coronavirus disaster, the exposure of the mullahs’ cover-up, the disheartening figure on the victims, the airing of reports on the activities of the Resistance Unit and protest movements, as well as reports on the activities of the Iranian Resistance internationally.

The contributions, statements of support, and letters by incarcerated prisoners coupled with their renewed pledges despite being imprisoned was another highlight of this telethon.

In this way, through the unsparing contributions to Simay-e Azadi, the 25th telethon became a “march by rebels” for resistance and perseverance until the liberation of Iran and the establishment of popular sovereignty.

Mrs. Maryam Rajavi, the President-elect of the National Council of Resistance of Iran (NCRI), issued a message about the 25th telethon, in which she said, “Greetings and hail to the Iranian people and rebels. Despite their poverty, and a multitude of challenges, illnesses, air pollution, and all the criminal activities of Khamenei’s velayat-e faqih (absolute clerical rule), and the Iranian regime’s anti-Iranian and inhumane policies and medieval suppression, by taking part in the telethon, these compatriots united and rose up for freedom with resolve and passion in order to overthrow the evil ogre of velayat-e faqih. Beyond the numbers and figures of financial support during the telethon, the boundless treasure of your compassion, heartfelt emotions, resolve and perseverance shone ever so brightly and epitomized sincerity, fraternity, love and the fiery tenacity of a united and determined people to bring about freedom to the enchained nation of Iran.”

Secretariat of the National Council of Resistance of Iran (NCRI)
January 19, 2021