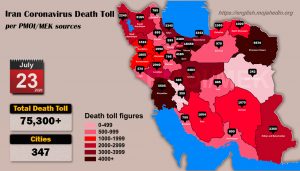 · Tajrish Shohada Hospital is facing a severe shortage of medical staff, who are exhausted and are facing a serious lack of equipment. The condition is worse than the first wave of outbreak.

· Doctors and nurses at Imam Hossein Hospital in Tehran are worried about the start of the third peak in fall. Medical staff need financial help, but the government does not support them.

· Iraj Harirchi, Deputy Health Minister: Daily death toll has increased by 50% compared to March, which is the result of our negligence and reopening (businesses, etc.). We ask all religious leaders to encourage people to donate masks!

· Significant increase in hospitalization and death toll in Khorasan Razavi. There are 1,200 Coronavirus patients hospitalized at the University of Mashhad affiliated hospitals, of which 230 are in critical condition.

The spokesperson for the regime’s Health Ministry put the number of victims in the past 24 hours at 221 and the number of patients in the Intensive Care Unit at 3,667. Speaking to IRNA today, she also mentioned that 25 provinces were in a red or alarming state, adding that “New cases of virus infection are still increasing in most provinces, including Khorasan Razavi.”

Iraj Harirchi, regime’s Deputy Health Minister, told ILNA yesterday, “The number of deaths has increased by 50% compared to March, and is the result of our actions in June, as well as (the result of) the reopening (of businesses, etc.)” He added: “I ask people to donate masks during the religious months of Muharram and Safar (the tenth and 11th month in the Islamic calendar). We ask all religious leaders to encourage people to donate masks.”

Massoud Mardani, from the National Coronavirus Combat Taskforce (NCCT), told the state TV-2, “Sometimes the statistics are really shocking. For instance, in an ICU ward, out of 64 staff members who work shifts, 57-58 of them have contracted the virus.”

In Tehran, doctors report a critical condition at the Shohada Hospital in Tajrish (northern Tehran). The hospital is facing a severe shortage of medical staff. Due to a large number of new patients, other wards of the hospital are also being prepared for Coronavirus patients. The condition is worse than the first peak. Nurses and medical staff are exhausted; they can no longer work. They face a serious shortage of medical equipment such as masks, gloves, and special clothing for Coronavirus.

At Imam Hossein Hospital in Tehran, everyone is worried about the start of the third peak in the fall. All the medical staff is tired and exhausted. They suffer dire from financial shortages. They should be helped, but the government is not helping.

ISNA quoted Alireza Zali head of NCCT in Tehran, as saying yesterday, “In the past 24 hours, 767 people have been admitted to the Province’s hospitals, 154 of whom were admitted directly to the ICU. New patients outnumber those discharged … The patients who enter the hospitals today are worse off than those admitted in previous days.”

In North Khorasan, according to doctors, the number of Coronavirus victims in the city of Bojnurd alone has reached at least 720 in the past five months. Medical and hospital equipment such as oxygen ventilators, personal protective kits, N95 masks, personnel gowns, and disinfectants are extremely limited in Bojnurd and other cities in North Khorasan.

In Khorasan Razavi, according to eyewitnesses, 250 people from Mashhad, mostly from the deprived and poor areas, have died from Coronavirus, at least 90 people in Sabzevar, 60 in Neyshabur and 40 in Quchan in the last three days alone.

The deputy chief of NCCT in Khorasan Razavi Province, said, “Yesterday, we saw a significant increase in the number of hospitalizations and deaths, which is a warning sign for the Province … The medical staff are in a tough situation,” reported Asr-e Iran, news site, July 22. “There are 1,200 Coronavirus patients hospitalized at the University of Mashhad affiliated hospitals, of which 230 are in critical condition.” According to Astan-e Quds Razavi state-TV, today.

According to Mehr news agency, today, in Mazandaran, “The governor of Mahmudabad described the situation as critical and said: In the second wave of the Coronavirus outbreak, the rate of transmission has increased by nine times and the death rate in Mahmudabad is worrying. The increasing trend of patients, while the capacity of all health centers is completed, has led to the infection of the medical staff and the reduction of the staff in providing services to patients.”

In Ardabil, the deputy governor said: “The record of patients with Coronavirus disease in the Province was broken, and we had to reopen all existing capacities in the province to deal with Coronavirus,” reported Tasnim news agency, today.