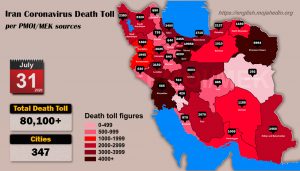 While as a result of the criminal policies of Khamenei and Rouhani’s, Coronavirus is taking more and more victims among the poor and the deprived, Khamenei, after a long silence, brazenly absolved the regime of any responsibility and said, “Some people have seriously suffered from the Coronavirus outbreak and this must be compensated for. (But) This must be compensated by the people. It is not possible to put all the burden on the government and quasi-governmental organs. They also have tasks that they have to undertake, but it is not enough and the people themselves can also help.” Quasi-governmental organs are foundations and institutions under Khamenei’s personal control, such as the Headquarters for the Execution of Imam Khomeini’s Order (EIKO), and the Mostazafan Foundation, and Astan-e Quds Razavi, where hundreds of billions of dollars of plundered property and capital of the Iranian people are accumulated. In this way, Khamenei is making it clear that, contrary to all expectations, he will not provide the impoverished people with any of these resources.

On the other hand, following the statements of Ayatollah Sistani in Najaf and many clerics in Iran and the regime’s own experts and specialists about the dangers of mourning ceremonies during the month of Muharram under the Coronavirus conditions, Khamenei took retreated from the previous positions which Rouhani had taken. He said: “In mourning ceremonies, the criteria are what health experts and the NCCT says. I personally follow whatever they say, and my advice to all organizers of such ceremonies is to listen to the healthcare staff. The Coronavirus is not a small issue, and if these observations are not taken into consideration, then it may lead to a major catastrophe with no end.

Khamenei made these remarks while the catastrophe due to criminal policies and the refusal of paying the costs of the workers and employees from the stolen capital and assets of the Iranian people is currently ongoing, and the number of victims has already gone beyond 80,000.

In Tehran, Alireza Zali, head of the NCCT told Khabar Online website today, “Tehran Province and city are red; Karaj has similar conditions that make the situation more difficult for the capital … The highest rate of infection has been reported in the eastern and southeastern districts … Phenomena such as garbage collection, child workers and things like that are one of the highlights which is considered as social harms of Tehran metropolis … The transiting population has been reported to be over one million people in recent days; This means that equivalent to the population of one province enters the city during the day and leaves the city at night. Due to the proximity of Tehran Province to Qom, Alborz, Semnan and Mazandaran provinces, it is more difficult to control the epidemic.”

The governor of Islamshahr was quoted by Fars news agency today, as saying, “So far, more than 300 Coronavirus patients have lost their lives in Islamshahr. We are in a difficult and exhausting period, and it is much more difficult for the medical staff to endure these difficult conditions and continue working.”

According to the same news agency, in Mazandaran, “Among the issues that caused concern was the increase in the death toll among young people and a significant increase in the prevalence of the virus among children. The virus is still spreading at an unspeakable rate in Mazandaran Province. The president of Mazandaran University of Medical Sciences said, currently, 1,581 patients suspected of Coronavirus infection are hospitalized.”

According to ILNA, in Fars Province, “Coronavirus continues to take lives, especially in Shiraz; while Fars officials have not yet made a decision to work in shifts or reduce the number of employees in the provincial offices and organizations on a daily basis in these critical circumstances. Meanwhile, the situation of bank employees is the worst. The head of the Fars Banks Coordination Council said, “In the last two weeks, 157 bank employees in the Province have been infected, and this number is increasing exponentially.”

Previous articleDisinformation Persists About the MEK Despite Growing Challenges
Next articleLatest News in Brief – August 1, 2020