IRAN: Fourth Day of Strike and Protest in Tehran Despite Massive Crackdowns 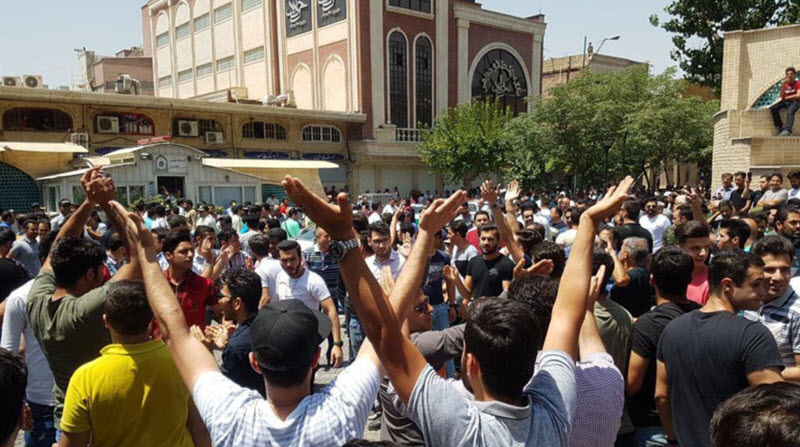 The strike of Tehran Bazaar continued for the fourth day on Wednesday, June 27th. In the Soltani bazaar, people demonstrated chanting: Zealous merchants, support, support; Do not be afraid, do not be afraid, we are all together.

The merchants in the Grand Bazaar of Tehran, the goldsmiths’ bazaar, Chaharsoogh, Mellat Avenue, Mowlavi, Laleh Zar, and the Aladdin Mall also refused to open their shops. In Hassan Abad, people and bazaar merchants protested and chanted: We do not want inflation and high prices.

The shops of Saadat shopping mall-- a garment manufacturer—are also on strike. A placard was installed at the entrance of the mall which read: “Tired of high prices and inflation.” The shopkeepers of Yaft Abad are on strike where the people closed the road in a protest action.

In fear of continuation and spread of the uprising of the people of Tehran, the mullahs’ regime has stationed repressive forces in different parts of the city, especially at the Baharestan Square and the areas around the parliament, and prevents the people from gathering in these areas. The regime’s mercenaries resort to blatant suppression by abducting noble striking merchants and protesting youths in front of the people's eyes, and taking them to their vehicles, and by surrounding malls and shops that are on strike and destroying the property of merchants and threatening them. The objective is to push them to open their shops, and to intensify the atmosphere of intimidation in the society. Attacking Laleh Zar by suppressive forces is just an example.

Also yesterday, repressive forces attacked the striking merchants at Laleh Zar, fired at closed shops, and fired tear gas at them in order to break their strike and disperse the protesters.

Bazaar merchants in Kermanshah, Isfahan, Vakil Bazaar of Shiraz, Pasargad shopping mall of Dorood and many other cities are also on strike.

Meanwhile, the mullahs’ regime is trying to cover up the current crisis by making changes to the Rouhani’s cabinet in a bid to prevent the spread of uprising. But the reality is that the Velayat-e Faqih’s regime itself is the main cause of the crisis, and such changes –similar to the last days of Shah’s rule—only intensifies the internal crisis of the regime and makes the will of the people stronger to overthrow this regime.

Secretariat of the National Council of Resistance of Iran
June 27, 2018