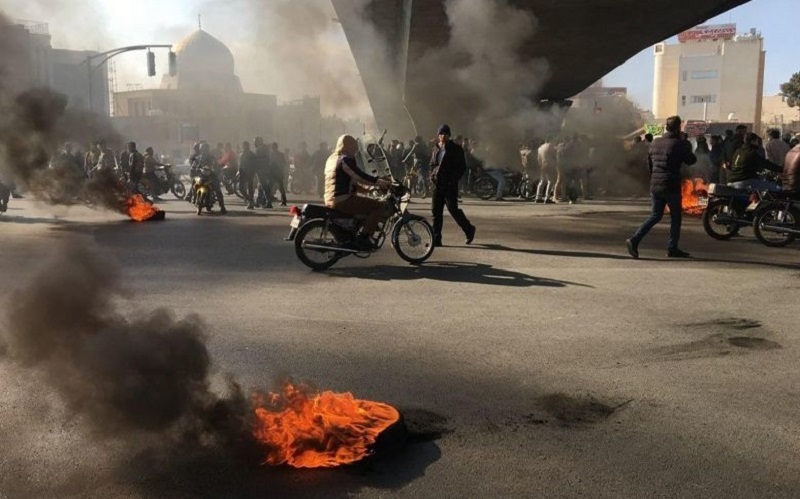 Today, Tuesday, Nov. 19, on the fifth day of the nationwide uprising, protests are continuing in Rasht where people have closed off roads.

The regime’s suppressive forces are too afraid to approach the people but are attempting to threaten and intimidate them.

Tonight, protests and clashes with suppressive forces are continuing in Pakdasht, Tehran. Last night, three banks were set on fire in that region. In Arya Shahr in Tehran, people chanted against the regime’s officials in the streets until well into the night. Suppressive forces fired into the air.

Students at Azad University in Gohardasht, Karaj, staged protests and chanted: “Enough promises, the people have had it;” “We don’t want a lifeless student.”

Last night in Mehrshahr, Karaj, clashes continued between youth and suppressive forces in Eram Boulevard until well after midnight. Several state-owned banks were set on fire. Gohardasht University students chanted “Enough slavery, the people have had it.”

In Shiraz and its suburbs, including Sadra Township, banks were torched and all of the closed-circuit security cameras were damaged or rendered inoperative. Intense clashes continued well into the night in the Anif-Abad Street, Quran ring road, Bushehr Street, Zand intersection and Namazi Square. People were distributing food among youth on the scene.

In Isfahan’s downtown, an IRGC-affiliated chain store was set on fire.