Iran - Protests and Clashes in Various Parts of Tehran, Isfahan, Khorramshahr and Shiraz on Fifth Day of Uprising 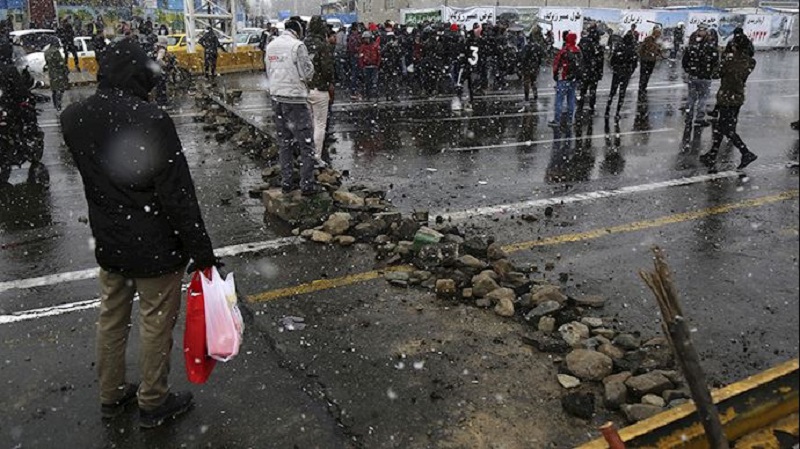 Protests and clashes are still continuing in Tehran and many other cities in Iran in the last hours of the fifth day of the uprising.

The Iranian regime’s State Security Force (SSF) & #IRGC, as well as Intelligence Ministry &plainclothes agents, have engaged in the indiscriminate killing of the ppl in rebellious cities. They fire on any group of 8-10 ppl.Nevertheless, #IranProtests have continued.#Internet4Iran pic.twitter.com/cdHEQMGzWZ

In Pakdasht, Tehran, people are in the streets and the regime has dispatched groups of suppressive mercenaries to the area. The city’s situation resembles a war zone.

In Narmak, Tehran, extensive clashes are ongoing and the suppressive forces fire shots in the air in order to disperse the people.

In Isfahan, at 8:00 PM local time, intense clashes occurred between youth and SSF agents, and they are still continuing. Youth are using hit and run tactics against swarms of Islamic Revolutionary Guard Corps (IRGC) agents.

Iranians Worldwide to Hold Tweetstorm Demanding Internet for #Iran, as #IranProtests Continue. The event will call on the international community to support #protesters by providing internet access to the people of Iran. https://t.co/yXDyz8lggJ#Internet4Iran

In some areas of the city of Shiraz, IRGC went to people’s houses and took away their young children, even teenagers as young as 12 years old.