MEK Rebuttal to Time Magazine Article,“Iranian Supreme Leader Ali Khamenei Is One Despot Trump Might Not Win Over” 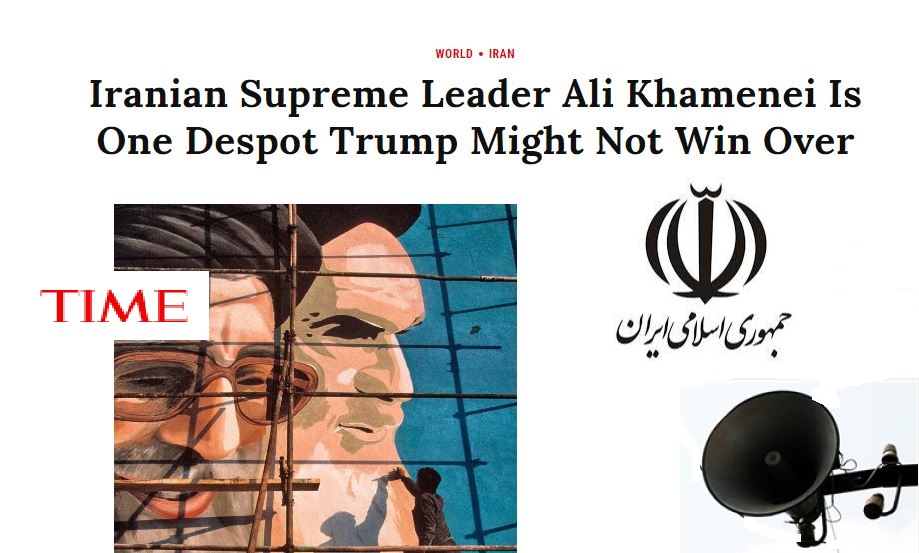 The following rebuttal was provided to Time magazine in response to its October 4, 2019 article entitled, “Iranian Supreme Leader Ali Khamenei Is One Despot Trump Might Not Win Over.”   As the magazine has failed to publish our response, it is being posted here.

There is only one way to explain “Iranian Supreme Leader Ali Khamenei Is One Despot Trump Might Not Win Over”, (Time, October 4, 2019) mistaken assessment of the status of the clerical regime, and its Supreme Leader Ali Khamenei. By taking a surprisingly irrelevant and an unwarranted swipe at the main Iranian opposition, the Mujahedin-e Khalq (MEK), the author seems to be parroting the Iranian regime narrative that wholesale or it is insinuating that there is no viable alternative to the mullahs and, therefore, realpolitik dictates continued appeasement.

The article’s characterization of the MEK as a “cultlike Marxist-Islamist organization…” with “minimal support but deep pockets” has all the markings of the propaganda disseminated by the Iranian regime’s intelligence services. Those who have seen the MEK, including more than 350 bipartisan former and current officials and lawmakers from 47 countries who visited Ashraf 3, the MEK’s new home in Albania in July 2019 and spoke with the residents up close and privately, have a very different view of the movement, corroborated by dozens of independent and scholarly studies and pieces of research.

The resources with which the MEK undertakes its activities, including the five-day conference at Ashraf 3, have all been secured through the help of Iranians at home and abroad, a testament to the group’s widespread popular base inside the country and among the Diaspora.

As for the current state of the Iranian regime, the author is totally wrong. The mullahs are on borrowed time and have never been so fragile and vulnerable at home as anti-regime protests by different sectors of society have persisted despite brutal repression. Last week’s uprising by thousands of people in Lordegan, central Iran, in which angry protesters set fire to offices of the Governor and the representative of the regime’s Supreme Leader Ali Khamenei, while chanting “death to the dictator” was the latest in the series of protests, which began in late 2017 in 160 Iranian cities and shook the regime to its foundations. The economy is on the verge of collapse and the mullahs’ regional transgressions have backfired.

The regime’s belligerence against its neighbors must not be seen in the context of the mullahs’ flexing their muscles but as an attempt to divert attention from the terminal domestic crises gripping the regime. Senior officials have said publicly that absent proxy wars in the region, they would have to withstand a fight inside Iranian borders. In an address to the Revolutionary Guard commanders on October 2nd, while acknowledging defections within the ranks of the IRGC, Khamenei said, “We must not be content to our region & ignore threats beyond our borders by containing ourselves in a box. An extraterritorial vision, for which the IRGC is responsible, is the depth of the country's strategy, & sometimes more important than anything else.”