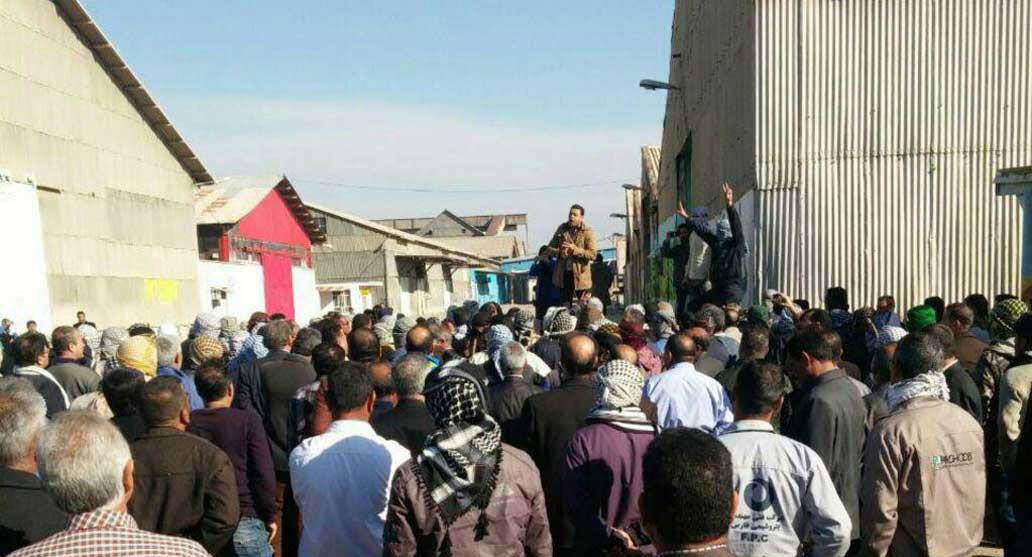 Call for the immediate and unconditional release of the arrested workers

On the morning of Sunday February 4, on the fifth day of the strike of the workers of the Haft Tapeh sugar cane complex in city of Shush in Khuzestan Province, agents of the special anti-riot guard, expedited from Ahvaz, occupied the factory and attacked the workers on strike, arresting dozens of them. They transferred the detainees to the Haft Tappeh Station of the security forces and then to the justice department of the city of Shush.

The brutal assault came after workers ignored the promises of the administrator of Shush and the former vice president of the company, saying they would continue their righteous strike until they meet their demands.

The repressive forces prevent the workers of agricultural section to join their colleagues by controlling all the factory doors and patrolling around it. The motorcycle riders of Special Forces are patrolling in the sugar cane fields in order to create a climate of fear among agricultural workers. They are preventing the workers from approaching the factory. The workers of agriculture sector, who were angry of these brutal measures, set fire to the so called 800 fields.
Other sugar cane workers of Haft Tappeh have demanded the withdrawal of all the repressive forces from the factory, and declared that workers’ rights will not be stopped by pressure, threats, arrest and imprisonment of workers.

The Haft Tappeh sugar cane Factory, with nearly six decades of history, over the years has been one of the hubs of employment and industry in Khuzestan. The corrupt and anti-worker policies of the mullah’s regime, by transferring the factory to its agents under the pretext of transferring to private sector, has put the factory in the verge of destruction, and the workers have been working and living under miserable conditions.

These workers have gone on strike since August to achieve their rights. On December 9, 2017, all workers of the Haft Tappeh Plant and Industry Complex, including official workers, daily-paid workers, agricultural workers, company employees and retirees went on strike and blocked the road leading to the company because of not paying their salaries. After six days, they ended their protest conditionally after they received their salary for one month and after the regime’s officials pledged that they would consider other demands of the workers. Following the failure to implement these promises, workers again went on strike on January 14. After that, the workers went on strike once again on strike again began on January 31.

Saluting the toiling workers of the Haft Tapeh sugar cane factory, and calling on all Iranian workers to show solidarity with them, the Iranian Resistance calls all international workers rights defenders and human rights defenders, especially the International Labor Organization and the Workers’ Unions, the High Commissioner for Human Rights, The Special Rapporteur on the situation of human rights in Iran and the Rapporteur on arbitrary arrests to condemn the anti-labor policies of the mullahs’ regime and to take effective measures to secure the immediate and unconditional release of the arrested workers.

Previous articleIran: Political Prisoner’s Complaint Letter Against Five Prison Authorities to UN Human Rights Rapporteur
Next articleConfession of the Director of the Regime’s Prisons Organization on the Arrest of More Than 5,000 People, During the Uprising