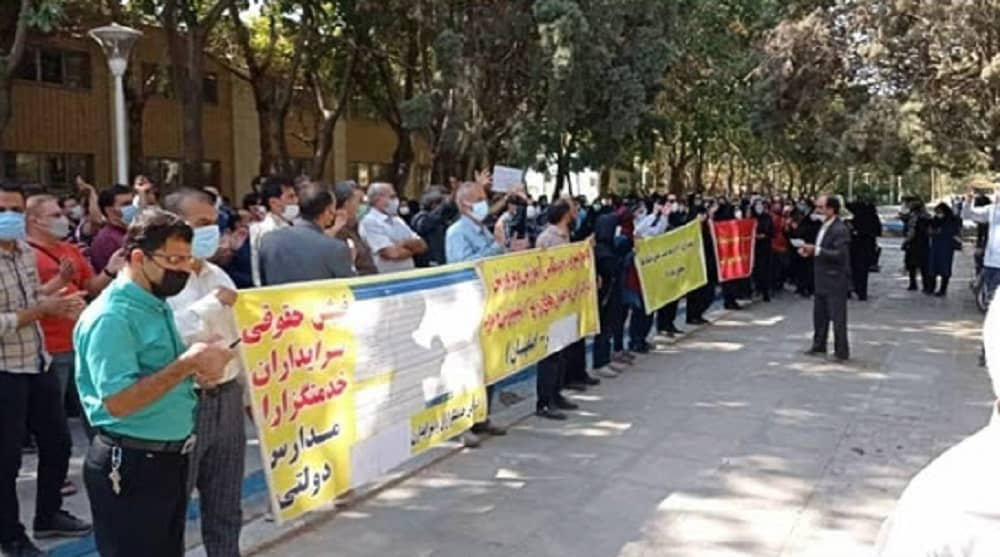 “Imprisoned teachers must be freed,” “We will not give up until we obtain our rights,” “Teacher stand up, defend your rights”

Mrs. Maryam Rajavi: An uprising and the overthrow of religious fascism is the only way to realize the rights of retirees, teachers, and workers.

On Thursday morning, October 14, 2021, teachers in Tehran and 44 other cities (25 provinces) rallied to protest against the difficult living conditions and the regime’s disregard for their legitimate demands. They vowed to continue their protests until they obtain their demands, including the release of all imprisoned teachers.

The teachers’ protest in Tehran took place outside the Planning and Budget Organization and in front of the regime’s Ministry of Education offices in other cities, despite the clerical regime’s repressive measures, including sending plainclothes agents to the scene and preventing the protesters from taking film or photos. In Ahvaz, the repressive State Security Force (SSF) attacked the demonstrators gathered in front of the regime’s radio and television building and dispersed them. In Kerman, the SSF arrested some of the teachers to prevent the gathering, but teachers carried out their protest, neutralizing the regime’s plans.

In Tehran, a large placard held by the protesters read: “Teacher is vigilant and hates discrimination.” Among the slogans used in the gatherings in different cities across Iran were, “No surrender, no compromise, our ranking must be realized,” “Imprisoned teachers must be freed,” “We will not relent until we obtain our rights,” “Teacher, demand your rights,” “Astronomical plunder (by the regime), is bringing misery to the public,” “Social justice equals, implementing the Ranking Act,” and “Implementing the Ranking Act without cheating.” The signs carried by the demonstrators read: “No to the imprisonment of teachers,” ” Imprisoned teachers must be freed,” “Teachers should not be imprisoned,” and “Laid-off teachers should be reinstated in their jobs.”

Ms. Maryam Rajavi, President-elect of the National Council of Resistance of Iran (NCRI), hailed the protesting teachers and called on the youth and students to support their legitimate demands, especially the release of imprisoned teachers. The teachers’ nationwide protests and solidarity in more than 40 cities against the mullahs’ inhuman policies, for restoring the teachers’ trampled rights and the right to free education for Iran’s children show the Iranian people’s resolve to liberate Iran from religious tyranny, Mrs. Rajavi said. The only way to achieve the rights of all sectors of Iranian society, teachers, pensioners, workers, nurses, and the medical staff, suffering from the regime’s oppression and corruption, is the overthrow of Khamenei and henchmen like Ebrahim Raisi by the Resistance Units and through an uprising, she added.

Secretariat of the National Council of Resistance of Iran (NCRI)
October 14, 2021 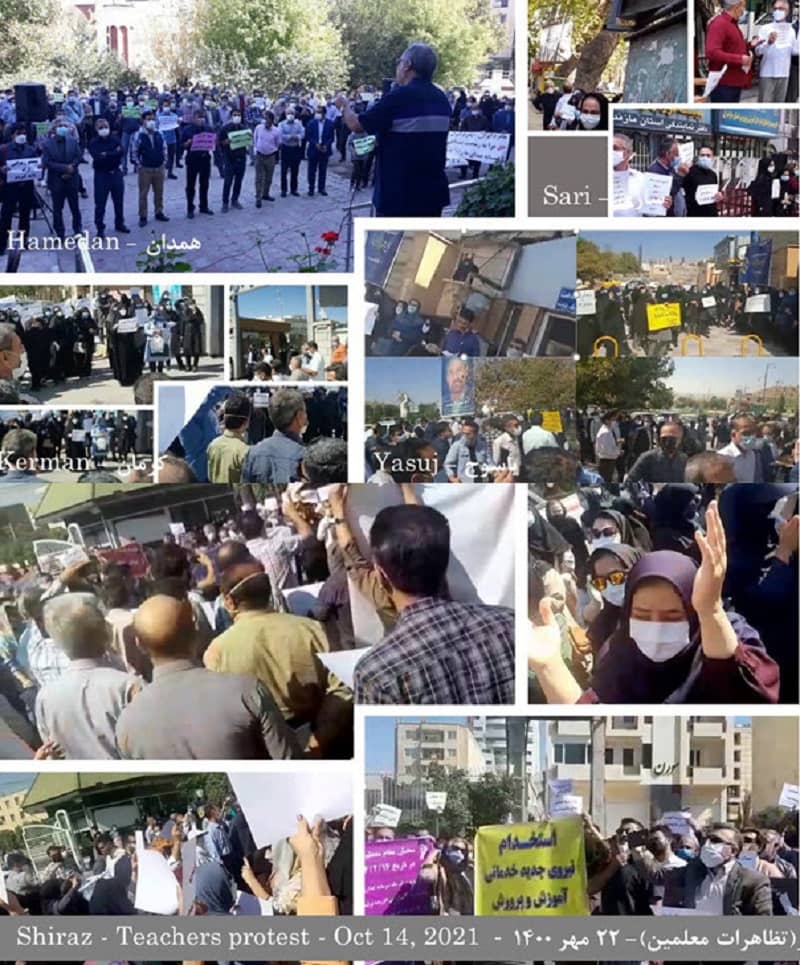 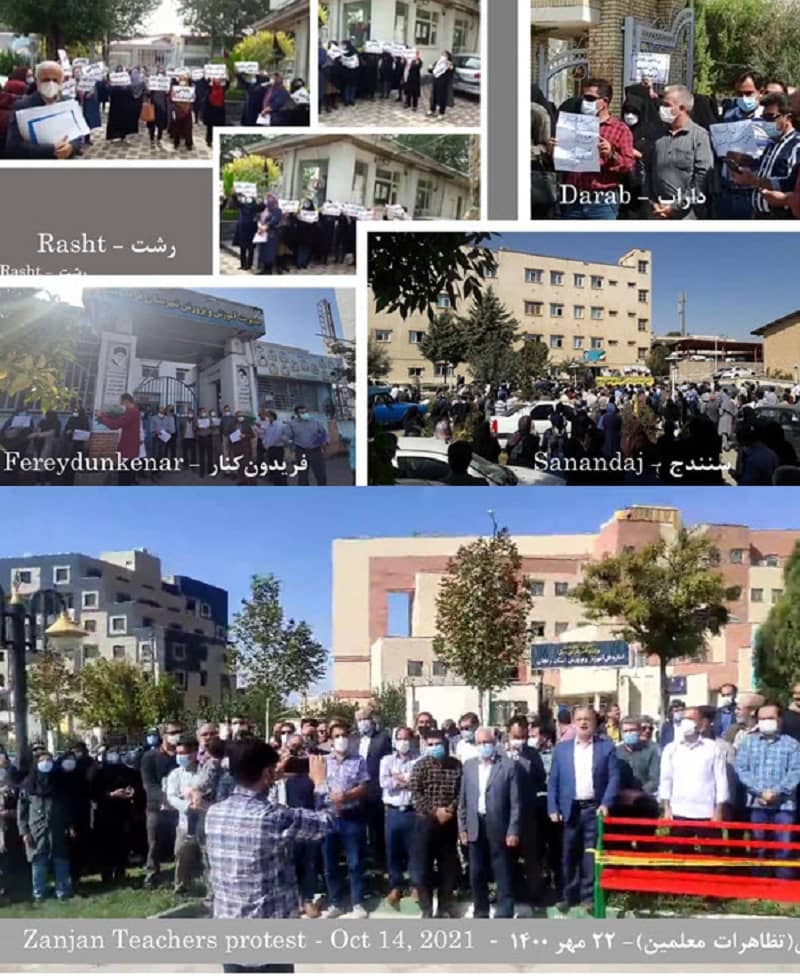 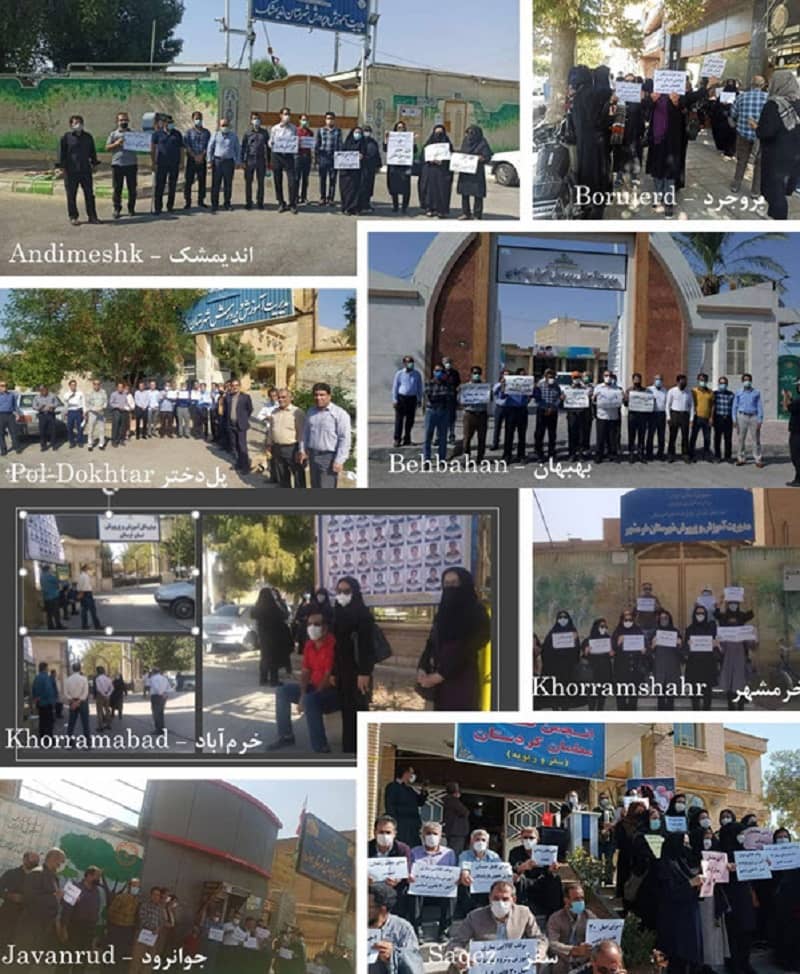 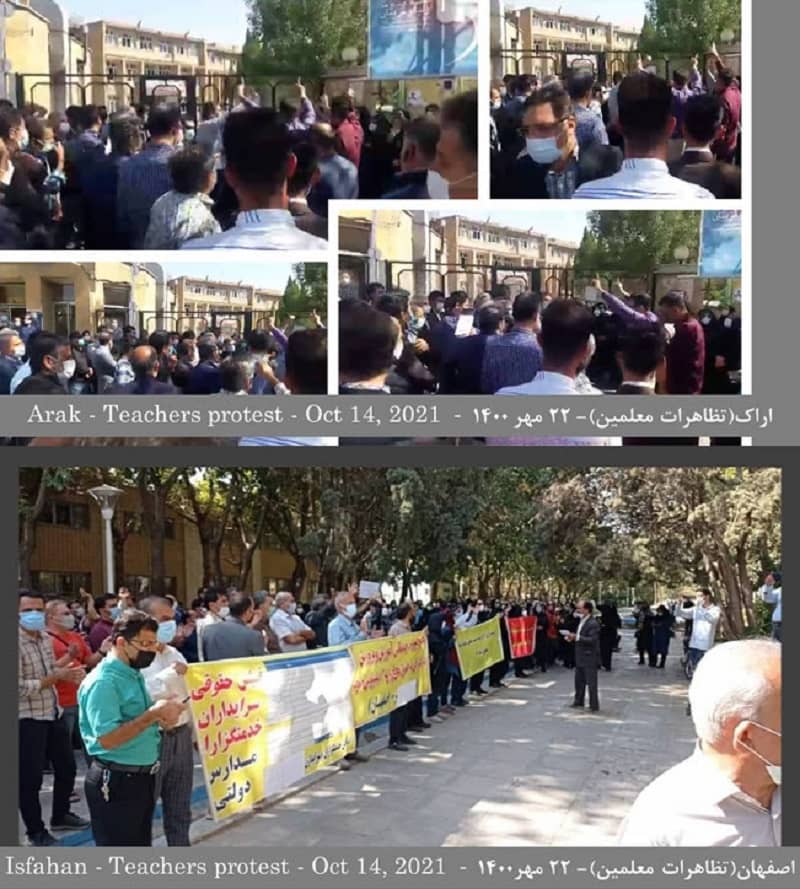 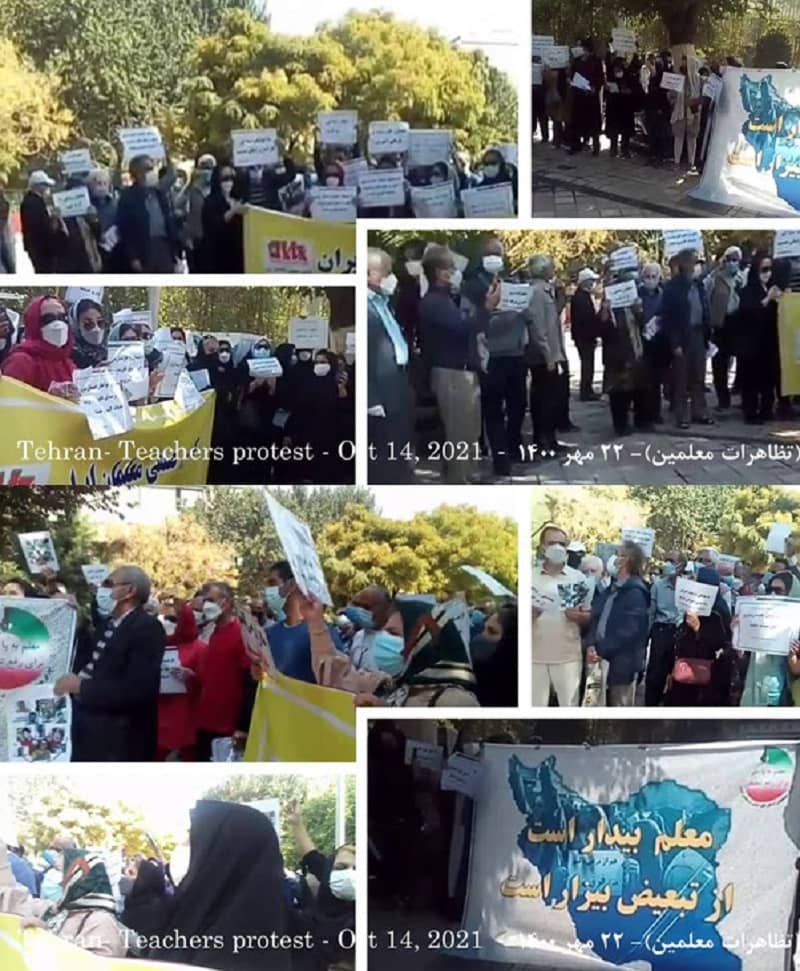 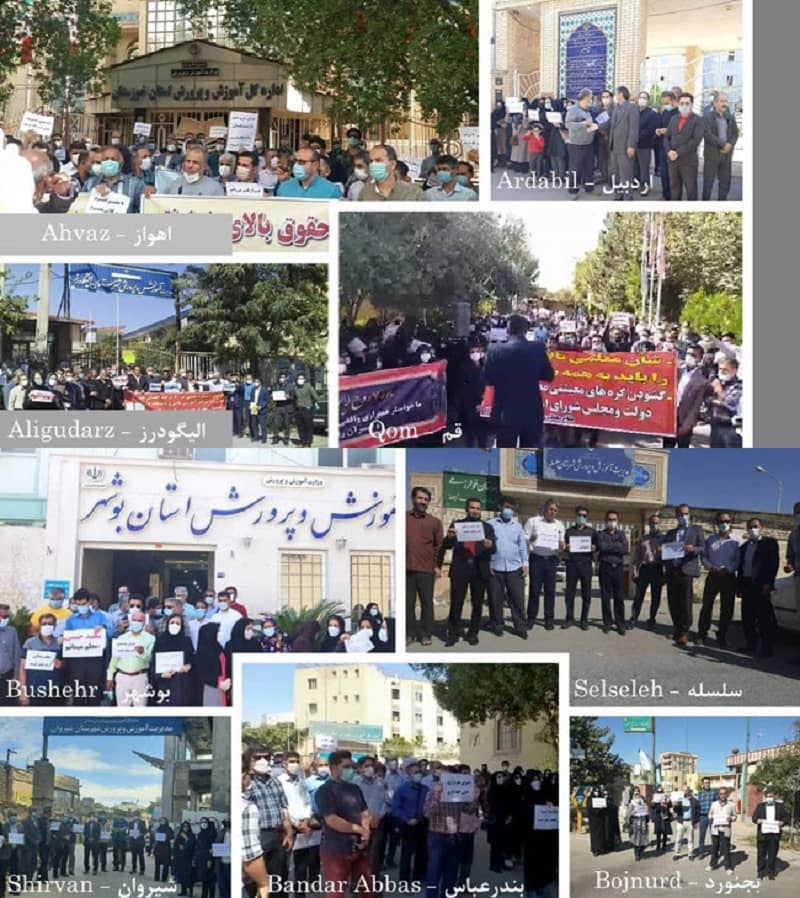 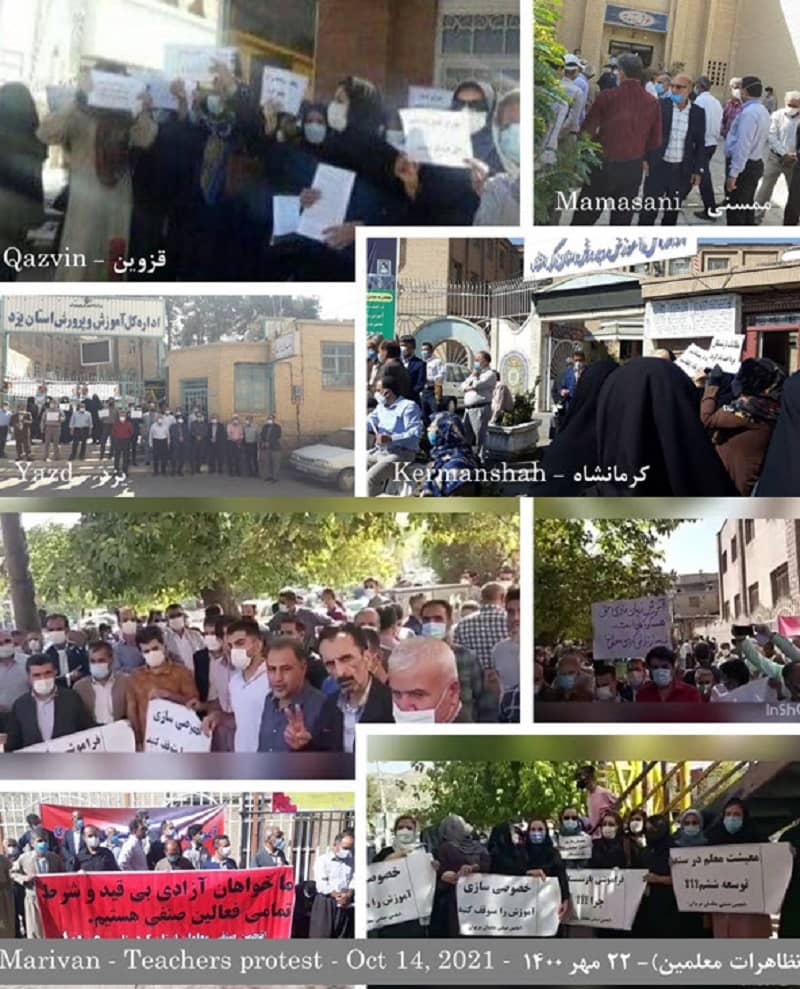