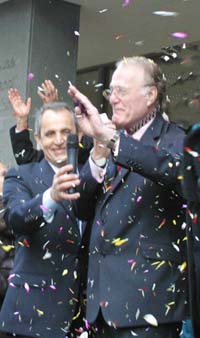 Lord Corbett, the Noble Conscience of the People of the United Kingdom

“Lord Robin Corbett of Castle Vale, the noble conscience of the people of the United Kingdom and their elected representatives, and a great friend of and supporter of the Iranian Resistance, will forever be remembered.”
Maryam Rajavi, February 19, 2012

Lord Robin Corbett of Castle Vale, the leader of the Peers in the British House of Lords and President of the British Parliamentary Committee for Iran Freedom, passed away on Sunday, February 19, 2012 at the age of 78.

Mrs. Maryam Rajavi, the President-elect of the Iranian Resistance, offered her profound condolences on the passing of Lord Corbett to his family, especially his beloved wife, Val Hudson Corbett, the people and the Parliament of the United Kingdom, the British Parliamentary Committee for Iran Freedom and to the PMOI members in Camp Ashraf.

In a message on the occasion of his passing, Mrs. Rajavi also paid tribute to Lord Corbett, expressing deep sorrow and regret over his demise, and describing Lord Corbett “as the noble conscience of the people of the United Kingdom and their elected representatives.”

The Iranian Resistance’s President-elect said, “He was an exquisite portrait of a human being who throughout his productive life clung to the noble values that are the mark of dignity and character, not only for his own people, but also for people everywhere and particularly for the main Iranian resistance.

“Today, the Iranian Resistance, especially the combatants for freedom in Camp Ashraf, have lost an unequalled friend, the people of United Kingdom have lost one of the most admirable symbols for defending the cause of liberty and democracy, and the entire humanity was deprived of a great human being.

“In the course of the past three decades, Lord Corbett rose up in defense of the violated rights of the Iranian people and in support of the People’s Mojahedin Organization of Iran (PMOI), the Iranian Resistance, as well as the Iranian people’s sovereignty, employing his entire political and parliamentary stature and credibility.

“Lord Corbett valiantly carried the torch of freedom in the struggle against the disgraceful policy of appeasing the ruling religious fascism in Iran, founded the British Parliamentary Committee for Iran Freedom and played a decisive role in the unprecedented political and legal campaign to remove the PMOI from the UK and the EU list of terrorist organizations.

“Lord Corbett embodied the love of humanity and love of freedom, and rebelled against the world of despair and appeasement. He ceaselessly displayed a restive conscience against injustice and despotism.

“He was the enemy of dictators and tyrants, in particular the mullahs of Iran, and as such, he courageously exposed the agents and branches of the Iranian regime’s Intelligence Ministry outside Iran. He described them as cancerous tumors that are contaminating the public and world opinion. Nonetheless, he believed and repeatedly opined that they must and can be pushed aside through vigilance and education.

“Lord Corbett will forever be remembered in the annals of Iran’s history, and we will always be honored to have had such a personality as our friend. For in the darkness of injustice, he reinvigorated human values and in the darkest era of Iran’s contemporary history, he rushed to the aid of our nation in its struggle against the ruling religious fascism.”