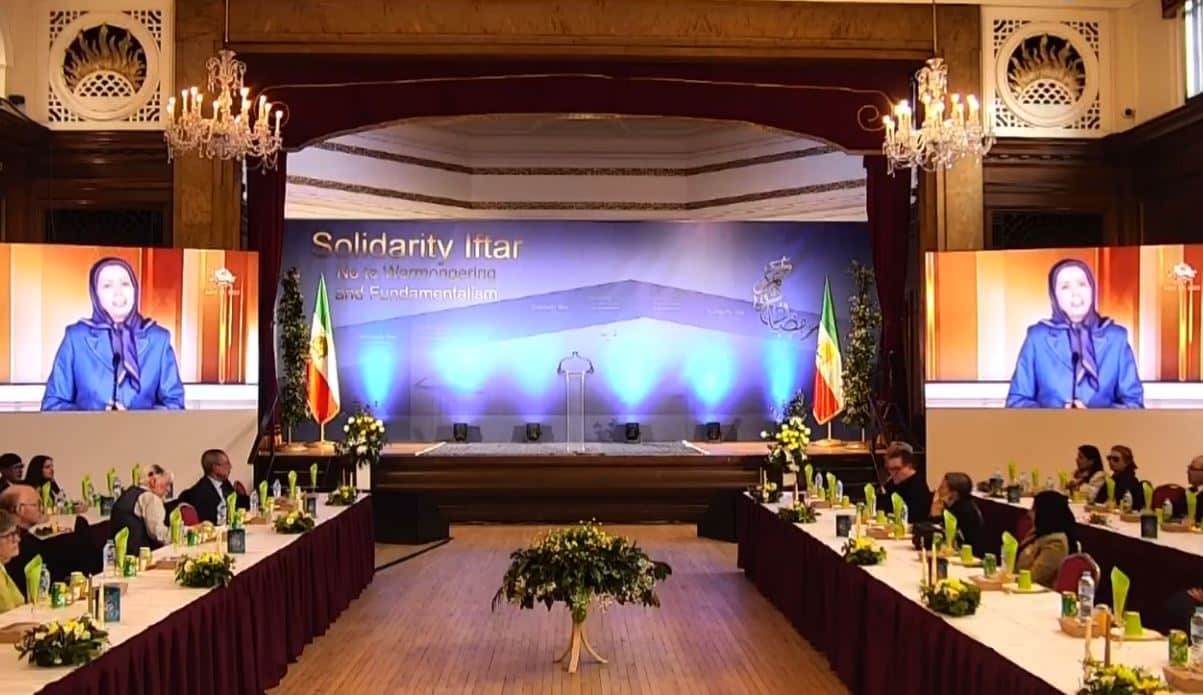 Maryam Rajavi: Islam Is a Messenger of Freedom and the Overthrow of the Absolute Rule of the Clergy

On Thursday, April 28, 2022, on the eve of Eid al-Fitr, a conference entitled “No to Belligerence and Fundamentalism” was held in London, with the presence of Mrs. Maryam Rajavi, the President-elect of the National Council of Resistance of Iran (NCRI). Several political and religious dignitaries from various countries also spoke at the conference, some via video. Members of the Mujahedin-e Khalq (MEK/PMOI) in Ashraf 3 in Albania also participated in the conference online.

In her speech entitled “Islam is the messenger of freedom and the overthrow of the absolute rule of the clergy,” Maryam Rajavi said: “Ever since, under the name of Islam, Khomeini and his successors have oppressed and plundered. They are engaged in warmongering, and in the name of Islam, they export terrorism and crimes to the Middle East countries, which is their worst betrayal. In fact, they have expanded Islamic fundamentalism, an ideology against Islam. Confronting Islamic fundamentalism requires a direct opposite cultural alternative. That powerful alternative is democratic Islam, as represented by the MEK. She added: With this ideology, the struggle against the clerical regime has continued for over 43 years. More than 120,000 have died, but this struggle continues. She underlined: Genuine Islam believes that governments must be based on the people’s vote. She added that the ruling mullahs have established religious discrimination and incited hostility among Shiites and Sunnis.

In his speech, Riyadh Yassin reiterated that by committing crimes and murder, the ruling regime in Iran is using the Houthi militias to destabilize Yemen and the entire region. He wished the Iranian people freedom and democracy.

Ashraf Rifi said: “The rich history of Iranian civilization, culture, and religion has been distorted by the murderous ruling regime and its policies. Similar to what they have done to Iraq and other countries in the region, the mullahs have occupied and taken Lebanon hostage and are using it for blackmail in their negotiations with the West. Still, we warn the West that no concessions should be made to the Iranian regime from the Lebanese pockets. The Lebanese people do not accept any solution that offers concessions to Hezbollah and the Iranian regime in Lebanon. For the past 40 years, the regime has tried to convince the Arab world and its neighbors that there is no alternative to its rule and that if this regime were to fall, there will be chaos or a worse regime than the current one will take over. Whereas there is a serious alternative in Iran, the NCRI, which is centered on the MEK, with more than half a century of struggle and sacrificing 120,000 martyrs in this path, now has strong support and network inside Iran. The protests and uprisings that take place inside Iran show that with the overthrow of this regime, undoubtedly, a democratic and peaceful Iran is on the way, which will be the epicenter for peace and stability in the region, and that is why the MEK is popular in Arab and Islamic countries. We also support their goals.” We do, and we are with the people of Iran because we have common goals and interests,” he added.

Ata Abdah said: “Mullahs’ tyranny is not limited to the people of Iran, but also the people of Iraq, Syria, Yemen, and Lebanon, and has disrupted the security and stability of the region.” We commend the efforts of Mrs. Maryam Rajavi, the Iranian Resistance, and the glorious heroes in Ashraf 3, and we welcome and support Mrs. Rajavi’s 10-point plan and emphasize that the free world stands by Mrs. Maryam Rajavi,” he added.

Referring to the President-elect of NCRI, the former Archbishop of Wales, Dr. Barry Morgan, said, “Being herself a Muslim, Madam Rajavi is offering a new modern, progressive Islam which totally rejects the fundamentalism that is holding back (the) country and offering a democratic platform that offers all religious and ethnic minorities in Iran equal rights and opportunity to shape the future of your country.” He added, “I urge the UK and our Government to stand with you, recognize your struggle for freedom and democracy in Iran just as we are doing in Ukraine.”

Iran: Members of a Resistance Unit Parade in Tehran