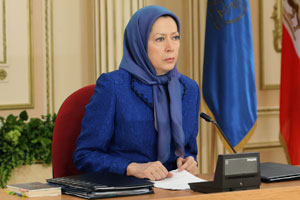 Rajavi called for the thorough expansion of this just and legitimate defense against religious fascism in Iran and its mercenaries throughout the region including Iraq, Syria, Lebanon, and Yemen.

She added that the root cause of the crises in the region is the mullahs’ regime, recognized as the world’s leading state sponsor of terrorism. As such, Rajavi pointed out that the only viable solution is resolve against this regime, its eviction from the region, and the toppling of the clerical regime in Iran.

Since 12 years ago, the Iranian Resistance — that itself was the first whistle blower on mullahs projects to acquire a nuclear bomb — has repeatedly warned that the Iranian regime’s interferences in Iraq and other countries in the region is one hundred times more dangerous than its nuclear program.

Mrs. Rajavi reiterated that the rationale behind the growing aggression of the regime in the region is to cloak its irreparable crises and its total bankruptcy.

She added that the policy of appeasement and conciliation towards this regime has encouraged the mullahs in their aggressive policies.

Secretariat of the National Council of Resistance of Iran
March 26, 2015

Previous articleIRAN: Hundreds of petrochemical workers protest against ‘discriminatory wages’
Next articleTurkish president: ‘Iran is trying to dominate the region’